By Refresh Leadership on January 8, 2020 in Express Employment Professionals

As Americans prepare to ring in the new year, the stock market is near record highs, unemployment is near record lows and the country is experiencing the longest economic expansion in history. But will it continue after the ball drops and into 2020?

To answer that question, Express Employment Professionals released the results of a survey of businesses on their outlook for 2020, and respondents generally are optimistic about the year ahead.

The 585 business leaders in the survey were asked, “Looking ahead to the next three months, do you anticipate your business will trend up, stay the same or trend down?”

This shows consistency with an August 2019 Express survey, in which 40% of respondents said their “current employment market” is “trending up,” 49% said “staying the same,” and 11% said trending down.

They were also asked whether they expect the country to enter a recession in the next two years. Only 14% expected a recession before the end of 2020, and 46% don’t expect one at all.

Respondents also have a generally positive outlook for wages with 45% saying wages will increase at their companies over the next six months and 54% saying they will stay the same. Nineteen percent expect benefit increases in the next year.

“I feel good about 2020. I see no signs of the economy softening,” said Chris Ashcraft, an Express franchise owner in Mobile, Alabama. “I see the market staying tight for talent.”

Daniel Morgan, an Express franchise owner in another part of the state, is feeling even more enthusiastic.

“I am more positive and bullish going into 2020 than when we were going into 2019,” said the Birmingham franchise owner. “The economy seems is still going strong. Last year at this time, there seemed to be a pause or hesitancy around the possibility of continued growth.”

“I feel our region will hit an all-time high,” she said. “We are positioned better than we ever have been. If there are any issues, it would only be because it’s an election year.”

“We are seeing an uptick already,” he said. “2019 was extremely flat for us, but now things seem to be turning around.” 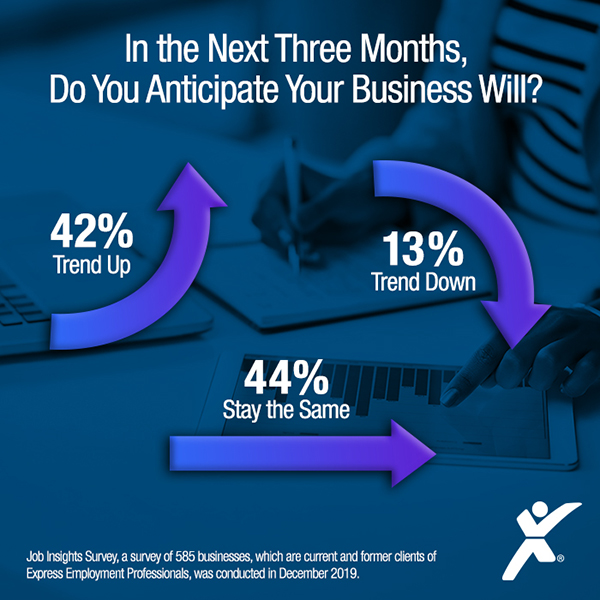 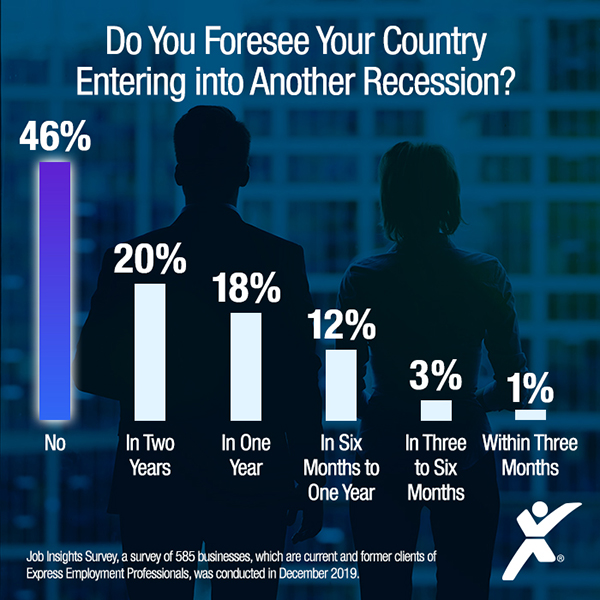 “Not long ago, the conventional wisdom said that 2020 would be the ‘Year of the Recession.’ But from all indicators, it looks like 2020 could turn out to be a year of stability, if not strong growth,” said Bill Stoller, CEO of Express. “As in any economy, surprises are always possible. But as 2019 comes to an end, business leaders are ready to welcome 2020.”

In December 2019, Express Employment Professionals surveyed 585 business owners, decision makers, and human resource professionals about the overall national hiring trends in the market today and how their business is impacted.

Creating Business Goals That Stick
Infographic: What Type of Leader Are You?