By Refresh Leadership on February 12, 2020 in Human Resources, Leadership and Management, Workplace

With five generations currently in the workforce, the competition for top talent is fierce. And while it’s a job seekers’ market with low unemployment, a majority of workers in a recent poll reported age has been an issue at some point in their career.

In the survey, Express Employment Professionals polled job seekers and decision makers about whether they felt age has ever been a factor in a hiring decision for a job. Eighty-four percent said they believed their age was a component, while 16% said “no.” Respondents were then asked to select their age group with 48% falling in the 55 – 64 years old category. 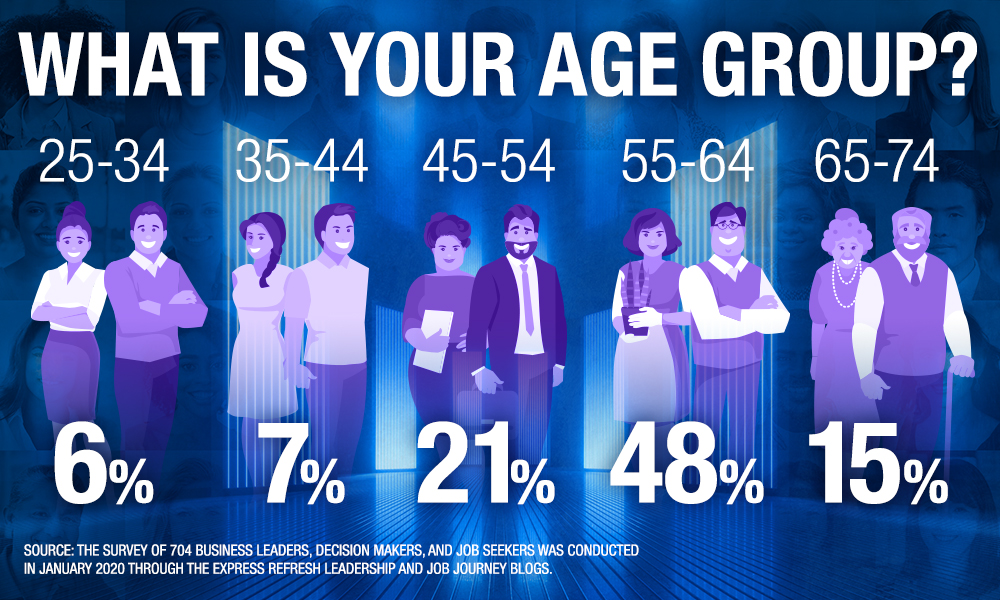 “We work to educate these individuals and reply that we place associates based on skills and availability,” Greeno said.

Michael Elliott, Express franchise owner in London, Ontario, was asked whether he sees examples of age discrimination during the hiring process. Even with today’s tight labor market, he argued that it exists at “both ends of the spectrum.”

“Older workers may not be considered for emerging sectors since their pay expectations are typically higher, and their job skills and experience may not align with the new generation skillsets in these sectors. Younger Millennials and Gen Zs are unfairly cast as difficult to place in traditional work environments, where experience still trumps enthusiasm and creativity,” Elliott said.

In Fishers, Indiana, Express franchise owner Lee Wenninger added that some clients have asked for a younger worker because of the perception a younger worker will be more flexible, adaptable and technologically savvy.

“On the flip side, sometimes clients have asked for someone older because they believe an older person will be more reliable and work-focused,” he said. “Stereotypes and perceptions persist.”

The Equal Employment Opportunity Commission protects employees in every aspect of employment, including the hiring process. But in 2019 alone, there were 15,572 age-related claims in the United States.

Age discrimination can have a negative impact on a company’s brand and could mean costly mistakes due to inexperienced workers, according to Patty Smith, vice president of Human Resources and Compliance at Express International Headquarters. Businesses should avoid crafting job descriptions with phrases such as “young and energetic” and use “motivated and driven” instead.

When interviewing candidates, businesses should have an age-diverse panel and evaluate a prospect on the knowledge, skills and behaviors required for the job. And if the time comes to lay off employees, decisions should be made objectively, Smith added.

“Most importantly, businesses should make sure their own staff includes employees of all ages,” Greeno said. “Secondly, make sure hiring managers are trained on what is or is not appropriate to say during the hiring process.”

Conversely, job seekers can also make a few adjustments to their resumes.

“Focus on what you can offer the company and what you would like to learn,” Greeno said. “Remove outdated experience, highlight hard skills and experience from over the years if you are a mature candidate. If you are more inexperienced, focus on an eagerness to learn.”

Wenninger suggests candidates should highlight how they either saved or made a previous company revenue as part of their resume.

“Regardless of age, if you help a business manage costs and make money, you are valuable,” he said.

“A successful economy is made up of workers from every generation because people of all ages bring different skills and life experiences to the table,” said Express CEO Bill Stoller. “Regardless of age or any other factor, at the end of the day, it’s important to hire the best person for the job.”

The survey of 704 business leaders, decision makers and job seekers was conducted in January 2020 through the Express Refresh Leadership and Job Journey blogs.

Hail, Mr. Churchill
Leading by the Numbers: What Your Enneagram Says About You as a Leader (Type 5: The Investigator)

4 Responses to New Poll: 84% Believe Age a Factor in Hiring