By Refresh Leadership on August 12, 2020 in Express Employment Professionals, Leadership and Management

In a time of record unemployment due to the COVID-19 pandemic, 81% of hiring decision-makers say their company has had extended job vacancies resulting in less motivated employees, loss in revenue, and lower employee morale.

Hiring decision-makers say employees cite better offerings at other companies as the top reason for quitting, such as pay/benefits (35%), perks (35%), or advancement opportunities (34%).

The primary reasons current employees leave jobs in the U.S. include: 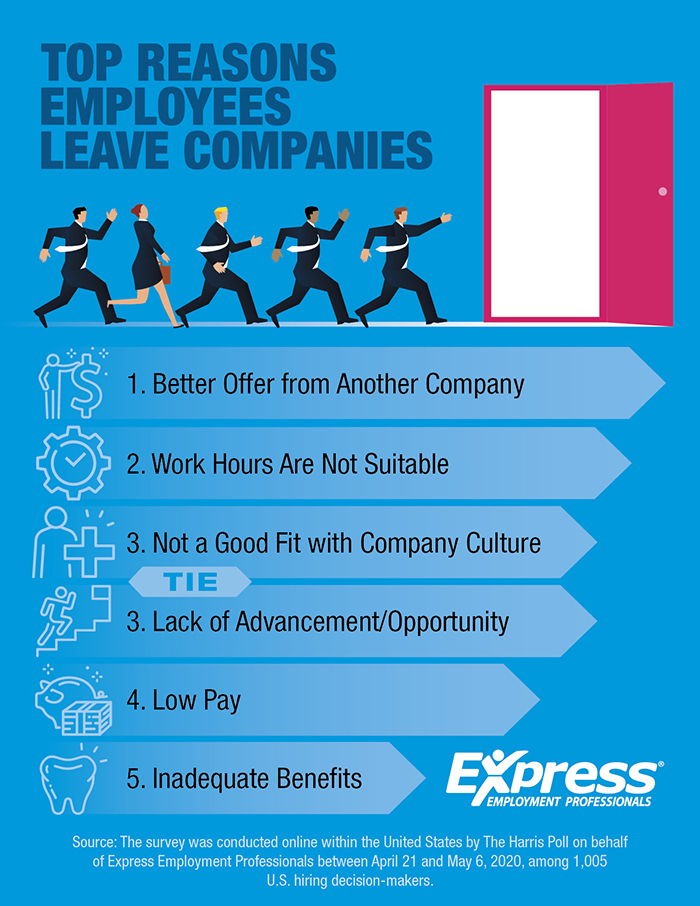 John Dickey, Express franchise owner of two offices in Massachusetts, believes employees move on from jobs when the company culture is poor.

“If workers are happy with the culture and they like working with their boss and coworkers, they will overlook the other reasons for leaving their job,” he said. “I’m a believer that workers don’t quit their jobs, they quit their boss.”

Of the 81% of hiring decision-makers who say their company has had extended job vacancies, the vast majority (82%) say the extended vacancies have taken a toll. This includes less motivated employees (25%), loss in revenue (24%), work not getting done (23%), lower employee morale due to employees being overworked (23%), and delays in delivery times (22%).

The extent to which these negative impacts are felt vary by company size, with the largest companies about twice as likely or higher than the smallest companies to say they experience these frustrations.

“Show appreciation and pay people fairly,” Lori Gajdzik, branch manager for the Crystal Lake, Illinois, Express office, said of how to retain and hire employees. “Allow for growth and development, and give flexibility if necessary for child care, as well. This is especially true as employees struggle with their school system and the uncertainty of the traditional classroom setting this upcoming fall.”

The primary reasons current employees leave jobs in Canada include: 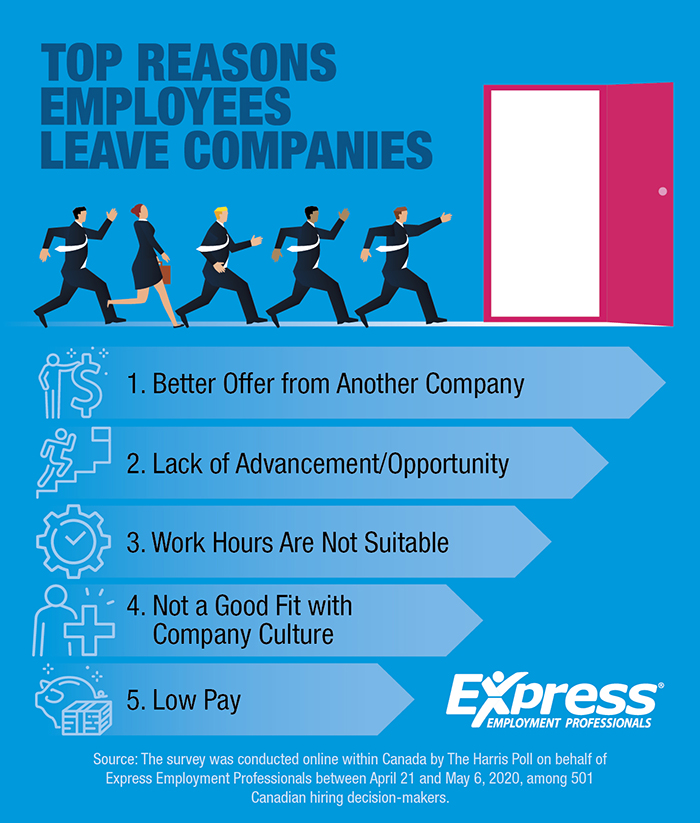 Bruce Hein, Express franchise owner in Sarnia, Ontario, agrees that a better offer from another company is generally the most common reason employees leave their jobs.

“It’s an all-encompassing reason because that better offer could include better hours, improved culture, opportunities for advancement, more money, generous benefits or all of the above,” Hein said.

Express franchise owner Brent Pollington, based in Vancouver, British Columbia, also sees a better offer as the top reason to leave a job.

“I think certain companies feel it’s a hiring market and try to hire people at a much lower rate,” Pollington said. “This is solving a short-term problem, however the candidate continues to seek employment at the market rate they feel they are entitled to. This results in disengagement and dissatisfaction from both parties.”

Of those whose company has had extended job vacancies, the vast majority (81%) say the extended vacancies had a negative impact on their company. This includes work not getting done (28%), less motivated employees (27%), lower employee morale due to employees being overworked (25%), loss in revenue (25%) or delays in delivery times (22%).

Hanif Hemani, managing director of an Express Employment office in Saskatoon, Saskatchewan, notes that some of the impacts of extended vacancies on companies include, “inadequate coverage of certain required functions, missing or incomplete tasks due to poor communication or anticipated contingency planning. This ultimately leads to internal employee dissatisfaction and external client dissatisfaction.

Hein, Hemani and Pollington all agree that federal support programs such as the Canadian Emergency Response Benefit (CERB) have impacted the ability to attract workers, particularly at the entry-level position.

Hemani notes however that federal interventions have been both positive and negative.

“For existing employees, the federal programs such as the Canadian Emergency Wage Subsidy (CEWS) has helped employers keep their doors open and employees working in many cases. However, the CERB has made recruitment of new employees, especially for seasonal, temporary or lower wage roles much more difficult,” he said.

Employees are a company’s most valuable asset, and no matter market conditions, it’s important to take care of them, says Express CEO Bill Stoller.

“There are a lot of variables in the current economic climate, but the one thing that will always propel businesses to success is a healthy company culture,” he said. “Good employees are worth the investment.”