By Refresh Leadership on October 14, 2020 in Leadership and Management

Seventy-one percent of U.S. hiring decision-makers agree that looking at candidates’ social media profiles is an effective way to screen applicants, according to a new survey from The Harris Poll commissioned by Express Employment Professionals.

And even after the candidate has gotten the job, 78% of U.S. hiring decision-makers believe employees should maintain a work-appropriate social media profile. 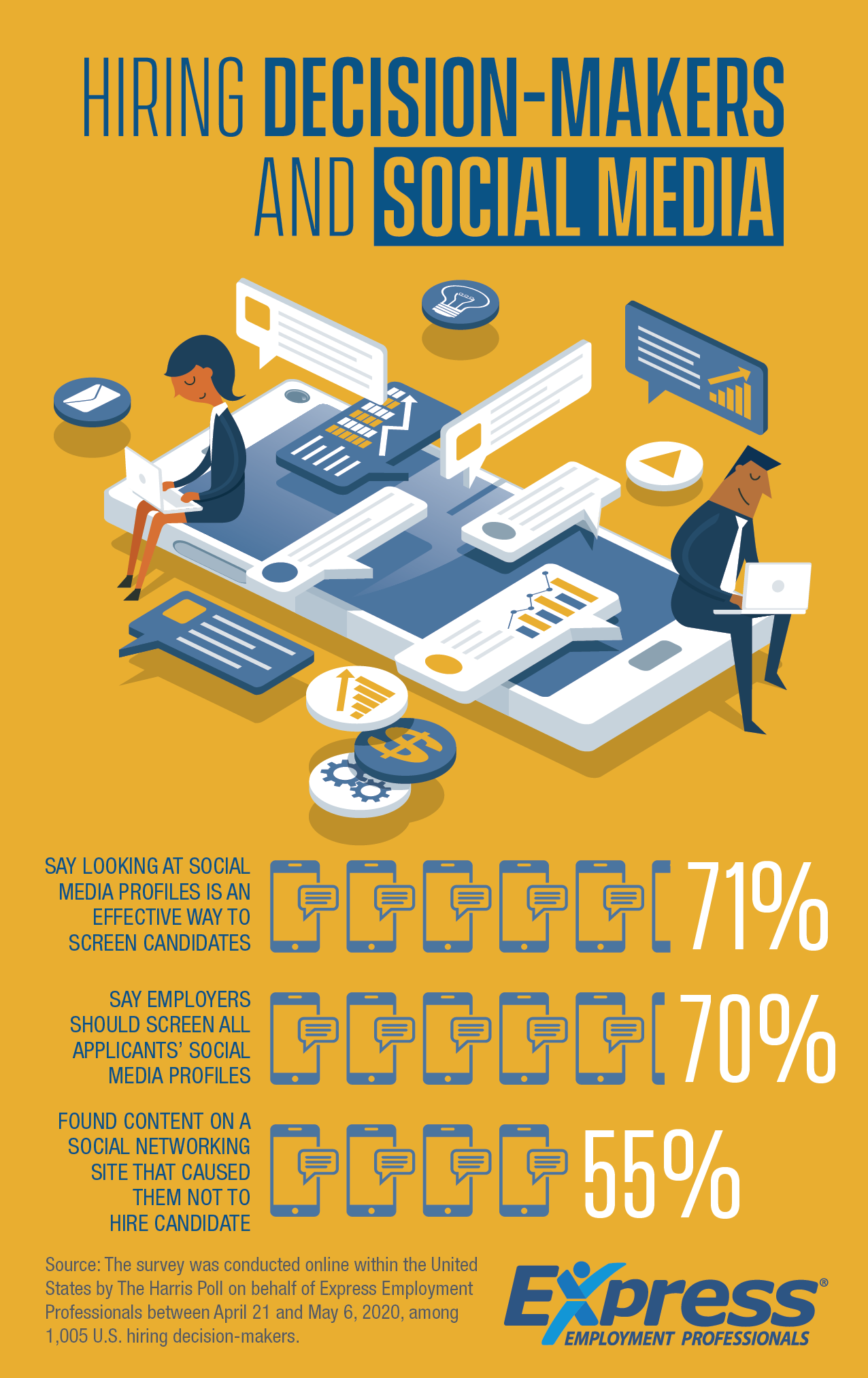 “I do believe social media is a good screening tool to see how the candidate communicates with others in an informal setting and also as a way to screen for potential red flags,” said John Calabrese, Express franchise owner in Utica, New York. “It’s effective in conjunction with other screening tools such as resumes and references.”

In one instance, Calabrese said his office was prepared to extend an offer of employment to an applicant for a position at a local hospital.

“The employer checked the candidate’s Facebook page and observed profanity and inappropriate photos,” he said. “We were asked to identify other candidates for the position.”

Jan Riggins, general manager for two Express franchises in Fort Worth, Texas, has also had clients decide against hiring candidates based on their social media profiles, but personally doesn’t think it is an effective screening tool.

“I do not believe it is an effective way to screen a candidate, especially with the current highly charged climate,” she said. “I have many friends, family and acquaintances who I would absolutely screen out for a position by looking at their social media profiles. But I also know they have been incredibly successful in their careers. I understand that people use social media for personal use and to express ideas, beliefs and behaviors they would never take into the work environment.”

In Grand Rapids, Michigan, Sonja Bielecki, director of strategic HR for the local Express franchise, says checking an applicant’s social media profiles should only be used to validate work history and experience and recruiters should receive special training on how to conduct this verification process.

“My professional recommendation is not to use it based on the legal ramifications or risk if not done correctly,” she said. “For my requirements, I only view a candidate’s LinkedIn profile and only their experience. Other forms of social media are personal and not professional. Also, those reviewing should be trained not to consider race, age, disability, sexual orientation, religion, etc.”

In the Harris Poll, 1 in 5 hiring decision-makers (21%) said they are not likely to consider a candidate who doesn’t have an online presence.

“As much as the world is now a place of social media and the ability to post anything, we fail to remember that some people are private and respect that,” Bielecki said. “I would not consider this a strike against the candidate.”

While Riggins usually agrees with Bielecki, she adds that she has used LinkedIn as a screening tool specifically for internal sales rep and professional recruiter positions since the network is such an integral part of those jobs.

“Work to keep your social media accounts current, especially LinkedIn, to reflect your current work experience and accomplishments,” Calabrese said. “They should be free of profanity and inappropriate photos. Remove any posts that may contain personal attacks. It’s ok to share your views but keep them professional and appropriate.”

Bielecki recommends having a third-party review of social media content for a hopefully unbiased and objective opinion. She also suggests some basic rules job seekers and employees should follow when it comes to their online presence: