U.S. hiring decision-makers are split on whether it is easy (52%) or difficult (48%) to recruit and fill positions at their company, adding the hiring process takes an average of 21 days to complete.

This is according to a recent survey from The Harris Poll commissioned by Express Employment Professionals.

Forty percent of U.S. hiring decision-makers say their company has open positions for which they cannot find qualified candidates. Some of the reasons they remain unfilled include: 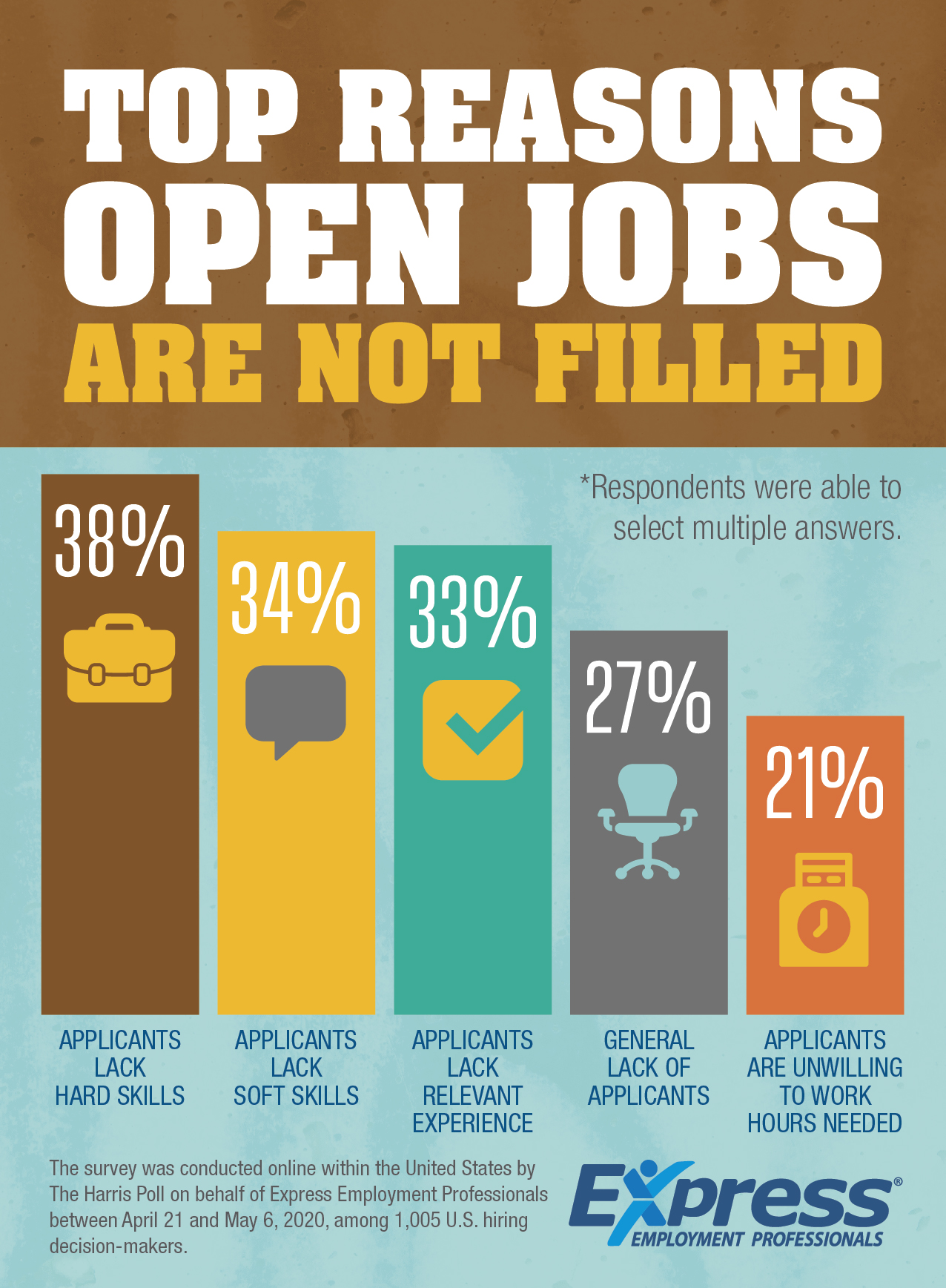 In Bend, Oregon, Express franchise owner Stephanie Miller says her office has seen business and demand increase for skilled trades but with fewer candidates entering these fields, there is currently a large shortage of workers with these necessary hard skills.

Mike Brady, Express franchise owner in Jacksonville, Florida, also says he has several job openings for specific skillsets such as machine operators, CDL drivers and forklift drivers. Adding to the squeeze is the diminished flow of qualified applications from recruiting pipelines in the last three months.

“I think the biggest obstacle is finding qualified people who want to work,” he said. “This is even tougher than when unemployment was at 4%.”

For John Dickey, Express franchise owner in Andover, Maryland, he thinks the applicant pipeline has slowed down due to what he calls the “COVID Economy.”

“Hourly workers can make more money right now staying at home and receiving unemployment benefits rather than going to work,” he said. “In the ‘COVID Economy,’ companies need to raise pay rates. A lot of the people who are looking for work come from the hospitality industry and don’t have the experience to work in manufacturing where there is a demand for workers.”

However, Dickey notes the situation is a Catch-22 because if the government doesn’t provide unemployment benefits to workers in hard-hit industries such as hospitality, there could be catastrophic poverty across the country. But the unemployment benefits could also incentivize industrial workers to stay home, which would negatively impact the economy.

All three Express franchisees agree that the number one thing clients can do to immediately attract job seekers is raise pay rates.

“I think pay is the biggest attractor right now,” Brady said. “We are seeing a lot of job-hopping for 50 cents or $1 an hour more. I don’t think the benefits and work environment are the biggest attractants right now. People are looking for pay more than anything.”

And if clients do find that perfect fit, Miller says they should seize the opportunity and not let the candidate slip away.

The survey was conducted online within the United States by The Harris Poll on behalf of Express Employment Professionals between April 21 and May 6, 2020, among 1,005 U.S. hiring decision-makers (defined as adults ages 18+ in the U.S. who are employed full-time or self-employed or have been laid off, furloughed, or given a zero hour schedule in the past 60 days but worked full-time or were self-employed full-time prior, work at companies with more than 1 employee, and have full/significant involvement in hiring decisions at their company). Data were weighted where necessary by company size to bring them into line with their actual proportions in the population

Give Thanks (Part 1): Best Way to Show Appreciation to Your Clients
Canada: COVID-19 Takes Toll on Hiring