By Refresh Leadership on April 28, 2021 in Express Employment Professionals

Nearly 1 in 5 U.S. hiring decision-makers say the COVID-19 pandemic negatively impacted their company’s ability to retain working parents in the workplace. This is according to a new survey from The Harris Poll commissioned by Express Employment Professionals.

Regardless of gender, another half (53%) feel the pandemic has negatively impacted both working mothers and fathers equally. 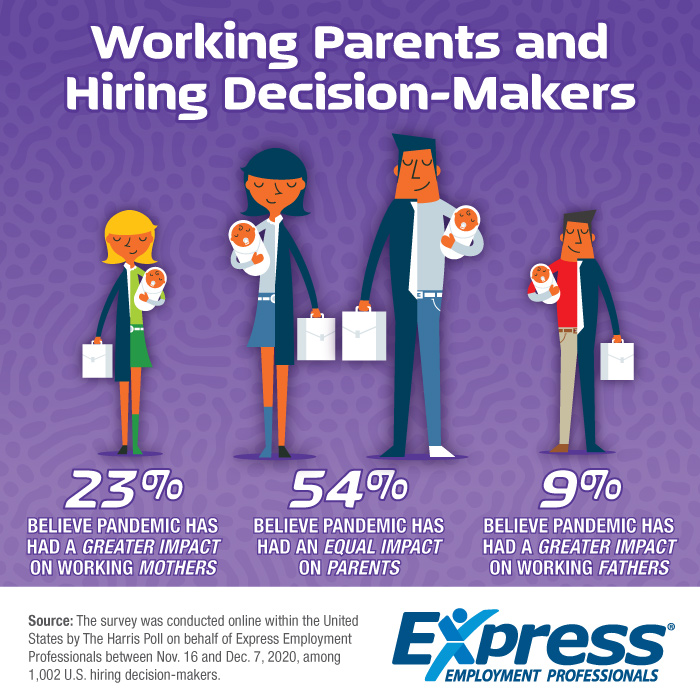 The majority of U.S. hiring decision-makers say their company would like to offer more accommodations for working parents but do not have the resources to do so (70%) or believe federal laws supporting working parents such as extended paid leave or universal childcare would be beneficial in helping working parents remain in the workforce (76%).

“The pandemic has had a persistent, negative impact on working parents due to the lack of reliable childcare-both affordable early childhood care and school-aged care,” said Kay Meyer, Express franchise owner in San Antonio, Texas. “Some school systems are now using varied schedules of home-based and classroom-based models, which creates a significant impact on the schedules of parents who do not have remote work opportunities.”

As for whether conditions for the past year have disproportionally affected working mothers versus fathers, Meyer says the question assumes that the family is a two-parent household. In her office, she has an employee who shares custody of twins evenly with their mother. When it is his week with the children, he bears the impact of any disruption to their early childhood care plan as both mom and dad are working parents.

“From a societal point of view, I believe that women are still asked to bear the brunt of child-rearing duties and therefore have been forced out of the workforce in increasing numbers,” she added.

Terri Greeno, Express franchise owner in Crystal Lake, Illinois, believes most single parents are mothers and those who are married often take primary responsibility for childcare, despite their careers.

“Many of our employees are in positions that do not accommodate working from home, particularly light industrial or skilled technical workers,” she said. “Often the responsibility of childcare falls to the mother if a choice must be made.”

The Express franchisees agree companies could offer more to accommodate working parents, especially with state closures during the last 12 months.

“Employers can see the visible strain that childcare puts on parents, children and families overall with public education shutting off access to school,” Greeno said.

And despite their best intentions, new initiatives aren’t always feasible.

“Purely from an engagement and retention point of view, I’m sure many companies wish they could do more, and large corporations likely have the flexibility to offer extended maternity/paternity/adoption bonding leave or even on-site daycare and after-school care,” Meyer said. “Smaller companies have had to stretch to develop accommodation policies, such as more generous PTO/unpaid leave or sick leave.”

“Working parents are an important part of the workforce, and with the instability surrounding the pandemic, business owners should allow some flexibility for childcare when possible,” he said. “A diverse labor market benefits everyone and parents in the workforce are then able to pass on a quality work ethic to the next generation.”

The survey was conducted online within the United States by The Harris Poll on behalf of Express Employment Professionals between Nov. 16 and Dec. 7, 2020, among 1,002 U.S. hiring decision-makers (defined as adults ages 18+ in the U.S. who are employed full-time or self-employed, work at companies with more than one employee, and have full/significant involvement in hiring decisions at their company). Data was weighted where necessary by company size to bring them into line with their actual proportions in the population.

US: Job Insights for 2021
Question of the Month: What Is Your Company’s Biggest Barrier to Success Right Now?