By Refresh Leadership on September 29, 2022 in Human Resources, Leadership and Management, Workplace Expectations for wage increases have jumped roughly 20% since 2020 as 70% of companies plan to offer higher salary adjustments through the end of the year. Benefits, however, will gain less ground as only 50% of businesses anticipate their offerings to increase compared to 2021, according to a survey from The Harris Poll commissioned by Express Employment Professionals. 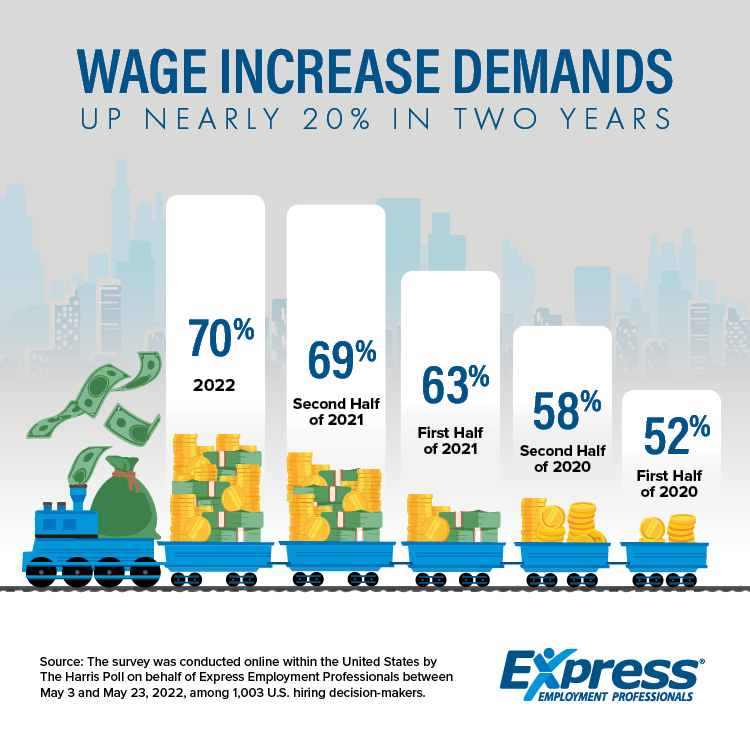 This comes as a recent nationwide survey from the Federal Reserve Bank of New York’s Center for Microeconomic Data reports the average “reservation wage,” the lowest wage workers would be willing to accept, soared to $73,873 in July.

Currently, more than half of companies (55%) offer paid leave, including paid maternity (39%), paternity (31%) and/or paid parental leave for parents fostering and/or adopting (22%). Other benefits offered to employees are flexible work hours (43%), flexible work location (34%), unpaid parental leave (31%) and/or the ability to work part-time (31%).

When it comes to these benefits, half of U.S. hiring decision-makers (50%) expect these offerings at their company will increase for the remainder of 2022 compared to 2021.

However, around 2 in 5 (42%) expect their benefits to remain the same. The growth of benefits packages may include offering aspects that were previously not available to employees, such as paid leave and flexible work hours/work sites.

The High Cost of Talent

“In our market, employers are very frustrated with having to pay higher wages and not getting the skill sets that merit that level of pay,” Texas Express franchise owner Nancy Reed said. “It’s causing some to put their job openings on hold and evaluate positions to determine if they will reopen them.”

In Nebraska, Express franchise owner Greg Sulentic agrees that employers are at a crossroads with what they can afford to pay.

“Our clients have reached the point where they can’t increase wages further after two years of driving up pay rates,” he said. “Their business costs have skyrocketed across the board, and wages are one of the largest parts.”

The exponential increase in wages cannot continue unchecked without causing businesses to suffer, according to Reed.

“At some point, it has to give,” she added. “I think this will cause employers to review their structures and go back to doing more with less. Some positions may be combined and offer higher pay, but the job responsibilities of these positions will also increase.”

Coming out of the COVID-19 mandatory closures, working from home and flexibility are two benefits that companies can offer when their budget won’t allow for higher wages, Sulentic said.

“Providing transportation is also a huge incentive in entry-level industrial jobs,” he said.

Reed adds that great work environments, perks such as gym memberships, gift cards for reaching goals, company picnics for team building and other creative initiatives are also ways businesses can increase retention for those looking to jump for better opportunities elsewhere.

“It is important to offer good compensation to attract talent, and it’s even more important to create a healthy work environment to retain them,” she said. “Employers are under so much pressure to deliver the goods and services while short staffed. As leaders, we really need to learn how to have the emotional intelligence to hold employees accountable while creating an environment that fosters growth, balance and fun. One that makes employees look forward to going to work every day.”

But even if employers offer these trending perks on top of more traditional ones, Sulentic says pay is king.

“‘What does it pay?’ That’s the immediate question,” he said. “Nobody asks about benefits until they know they will get the wage they want.”

Finding the right balance between wage offerings and spending limitations is one of the biggest challenges employers are facing right now, according to Express Employment International CEO Bill Stoller.

“So many businesses are stretched thin between salary demands, inflation and supply chain blockades,” he added. “The next several months will be pivotal to companies to see if they can survive the high cost of success.”

Working for a Small vs. Large Company
Question of the Month: Is Your Current Job Aligned with Your Career Goals?