Two-thirds of Canadian companies (66%) say they are increasing wages this year, up significantly from 51% in 2021 and 44% in 2020, according to a survey from The Harris Poll commissioned by Express Employment Professionals.

While most companies are increasing wages this year, only 28% are increasing benefits, with the most common being increased sick leave (17%), additional health care incentives-like gym memberships or mental health resources (17%), increased paid time off (16%), more parental leave time (13%) and improved retirement plans (12%).

Despite increasing wages and some improvement to benefits, Canadian companies say employee turnover remains high, with 35% of companies reporting that turnover has increased this year compared to last. In addition, 40% of companies say they have open positions they cannot fill.

More than 1 in 3 companies (36%) say employee turnover has increased because of better pay and/or benefits offered elsewhere, while slightly over 1 in 4 companies (28%) say it is due to better perks (e.g., more vacation days, remote or hybrid work).

Additionally, a majority of companies (65%) say it is impossible to offer all the benefits that employees want now. Indeed, more than 1 in 5 companies (21%) say their biggest hiring challenge this year is that their pay is not competitive enough to attract employees, with uncompetitive benefit offerings identified as the second biggest challenge at 16%. 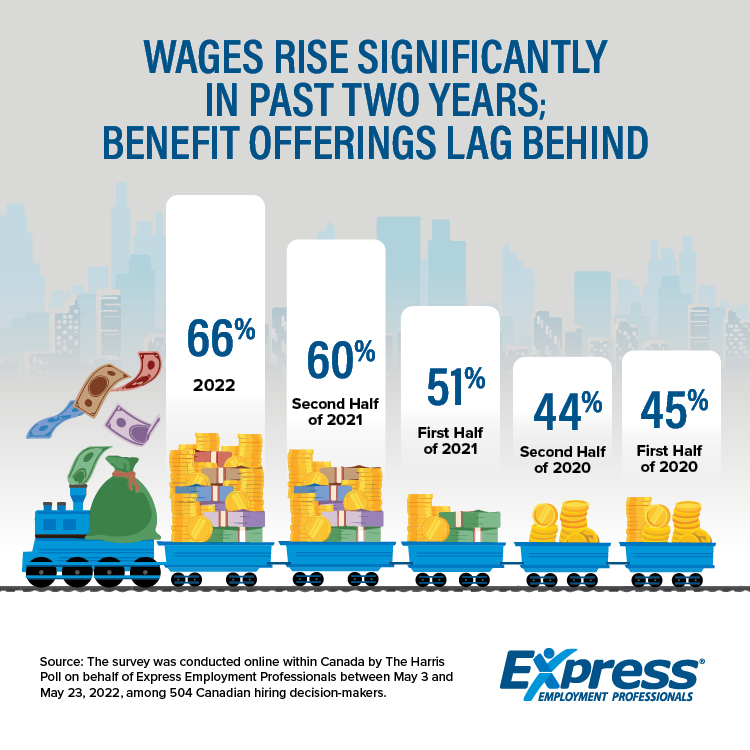 While wages are increasing quickly, it’s not having the same impact when it comes to retaining and attracting employees that it used to, according to Dwayne Williams, an Express franchise owner in Guelph, Ontario.

“Many companies have implemented wage increases in the past 2 years, but it hasn’t helped with attracting workers because labour shortages have led to other companies offering even more, and high inflation means wage increases aren’t keeping up with the cost of living,” said Williams. “We are seeing less qualified candidates ask for higher wages and companies are struggling with finding talent whose pay expectancy matches what they pay their current staff.”

While pay continues to be the number one concern for employees and job seekers, Williams says benefits have become more important than ever.

“Benefits are becoming more important to candidates and also to existing employees when it comes to retention,” said Williams. “Traditional benefits are important, but flexible hours, ability to work remotely/hybrid schedule and providing skills training have become more popular and desirable.”

“Company culture has also become more important as more employees want to work for companies that value them and provide flexibility,” he added.

Finding the right balance between wage offerings and spending limitations is one of the biggest challenges employers are facing right now, according to Express Employment International CEO Bill Stoller.

“So many businesses are stretched thin between this, inflation and supply chain blockades,” he added. “The next several months will be pivotal to companies to see if they can survive the high cost of success.”

The survey was conducted online within Canada by The Harris Poll on behalf of Express Employment Professionals between May 3-23, 2022, among 504 Canadian hiring decision-makers (defined as adults ages 18+ in Canada who are employed full-time or self-employed, work at companies with more than one employee and have full/significant involvement in hiring decisions at their company). Data were weighted where necessary by company size to bring them into line with their actual proportions in the population.