By Refresh Leadership on June 24, 2022 in Express Employment Professionals, Workplace

With rates higher than they have been in decades, 92% of U.S. companies report inflation is affecting their business in some capacity with 87% adding that this hardship will impact their operations for years to come, according to a recent survey from The Harris Poll commissioned by Express Employment Professionals.

In response to the high inflation rate, 40% of companies have raised prices, 39% have absorbed some of the additional costs, 27% have adopted new technology to automate processes, 24% have reduced transportation and 18% have outsourced a portion of their work.

Looking to the future, the 87% of U.S. businesses that predict inflation fallout is here to stay say this will be in the form of increased prices of goods and services (43%), increased wages (38%), increased taxes (35%), increased interest rates (31%) and decreased sales or revenue (24%). 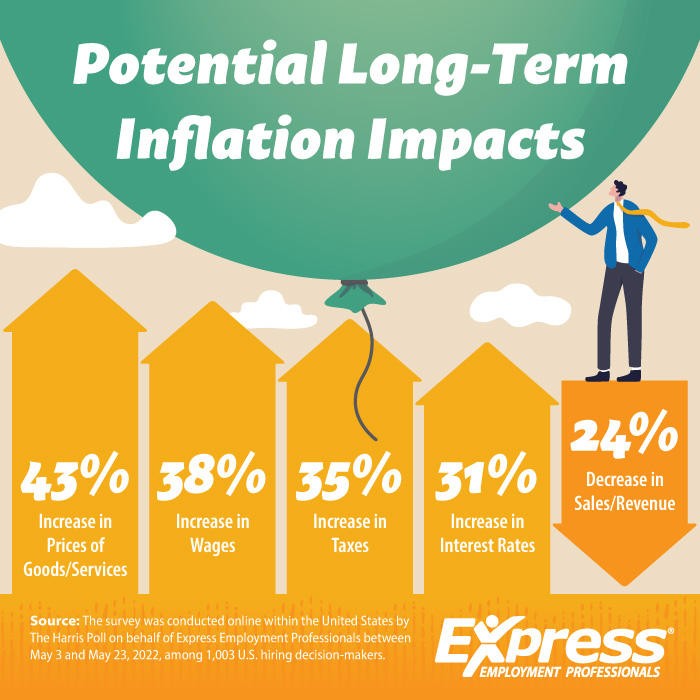 And with perhaps more dire concerns, 47% of U.S. hiring decision-makers agree or strongly agree with the sentiment that their company won’t be able to survive much longer if wages/costs continue to increase so quickly.

In Michigan, Express franchise owner David Robb says they are hearing about significant price increases in the transportation and logistics industries, as well as rising prices for raw materials and worker wages.

“For most businesses, this is translating into higher prices, which isn’t causing much pushback from customers,” he said. “Companies actually seem less worried than you would expect because they have such pent-up demand for products. They are not worried about losing customers due to price increases. The bigger challenge is finding the workers to fill orders and meet demand.”

Those workers are in short supply and companies are starting to be more cautious when hiring because “wages are out of control,” according to Florida Express franchise owner Mike Brady.

“With more jobs than people, we have not seen a huge difference, but the possibility of a recession still has companies spooked,” he said. “Inflation has squeezed the labor market even more. Workers are not willing to travel as far and are asking for much higher pay. For clients who are unwilling to offer more money, turnover and inability to hire is hurting production.”

Job seekers also continue to ask for and expect higher wages in Robb’s region sometimes because they see higher pay advertised locally. However, one major commodity is a large component behind the price increases and demand for higher pay-record fuel costs.

“People are taking the distance of their commute more seriously due to gas prices,” he said. “They may be willing to take a lower-paying job that is closer to home, but if they have to travel, they need a higher pay rate. We also hear about increases in things like rent and basic items such as groceries. Overall, studies show that even with the increase in wages, working families may be worse off today than before due to inflation in everyday living expenses.”

Moving into late 2022, Robb believes inflation will begin to slow as excess product demand begins to taper off.

“There will still be a labor shortage, but things will balance out a little bit,” he said. “However, while inflation might wane a bit, this doesn’t necessarily mean prices will decrease as many of these price hikes will stick around, especially higher wages.”

“From labor and supply shortages to high gas prices and soaring inflation, American business owners are understandably frustrated right now,” he added. “Without some relief, I fear the impact of current conditions could affect the economy for years to come.”

On the Job Podcast S6:E8: Laddering Up to a New Livelihood
Training Employees to Fill Needed Skills During Hiring Crunch