By Refresh Leadership on August 31, 2022 in Express Employment Professionals

Concerns about an economic slowdown and possible recession have not eased the labour shortages facing companies across Canada, which are still engaged in fierce competition for workers, according to a new study from The Harris Poll commissioned by Express Employment Professionals.

To prevent employees from leaving and to attract new workers, two-thirds of Canadian companies say they are increasing wages this year (66%). Close to half also say they have enhanced benefits (48%), with more sick leave (17%), better health care benefits (16%) and more paid time off (16%) among the most common improvements. 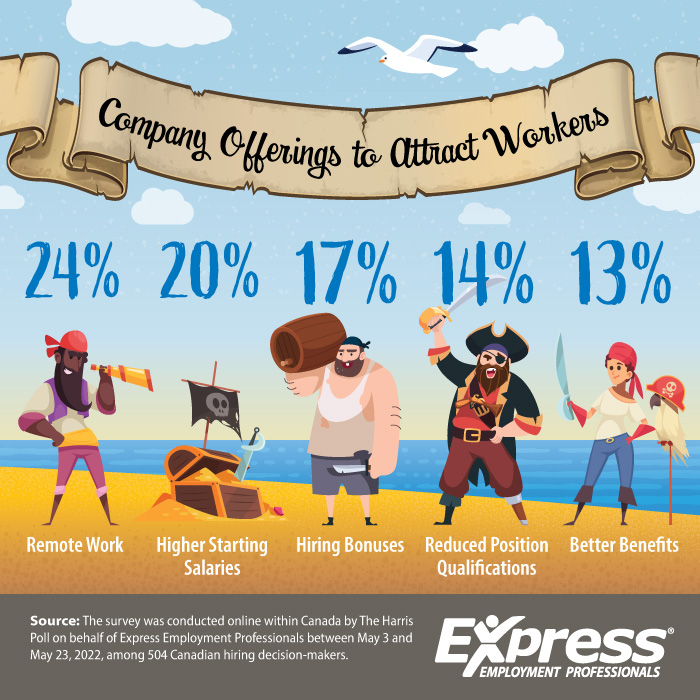 Despite improved pay and benefits, more than one-third of companies (35%) have experienced an increase in employee turnover so far this year. Both better pay/benefits (36%) and better perks (28%), like summer Fridays or unlimited vacation days, offered elsewhere are leading reasons.

Companies expect lack of competitive pay (21%) and/or expanded benefits (16%) to continue to be the biggest hiring challenges they will face over the next year.

But two-thirds of Canadian companies say it is impossible to offer all the benefits that employees want now (65%) – a sentiment that has held steady since 2021 (67%).

Regardless of whether there is a recession, the labour market will remain tight for the foreseeable future, according to Michael Elliott, owner of Express franchises in Kitchener and London, Ontario.

“I don’t believe inflation nor concerns about a recession are scaring businesses since both are seen as short-term,” said Elliott. “Consumer demand has barely eased as inflation has crept up. This all bodes well for manufacturers, transportation and logistics, retail and so on. What businesses need to do is get more creative in their overall package that is offered to employees, so they are properly staffed for this ongoing wave of consumer demand.”

“In my opinion, we will see a surge of companies expanding their incentives and benefits as a strategy to attract more talent to their organizations and to retain their loyal employees,” said Elliott. “While inflationary pressures have increased service costs, companies are reconsidering their benefits package as a way to ease the impacts the last couple of years have had on employee wellness, both physical and mental.”

In terms of what employees want, Elliott says flexibility is key.

“Any company that takes the brave step to create a flexible work environment that delivers a balanced work and life plan will win the employee engagement and retainment game,” said Elliott. “Some of the most popular benefits at the moment challenge conventional employment practices, such as a 4-day work week. Similarly, since so many companies went to a work-from-home model during COVID-19, they are now more open to a blend of in-office and home-based accommodations, which is also popular with employees.”

But he points out that not all generations value the same thing.

“Personal development ranks high for younger Millennials and Gen Z, so any organization that considers subsidized education and the flexibility to attend classes will likely improve their retention and attraction of good employees.”

Elliott advises that companies engage their employees to figure out what improvements can be made and points out that not all changes have to cost money.

“During a recent meeting with a large manufacturer, they shared their staffing challenge of not finding workers to fill their shift times, and it was determined that the solution was to change their start time by half an hour in order to accommodate a bus schedule for workers,” said Elliott. “Solutions can be simple and even inexpensive as long as the will to change is there.”

He warns that companies stuck in traditional hiring and compensation practices will continue to lose employees.

In terms of the labour market six months down the road, Elliott predicts companies will more heavily rely on a contingent workforce to fill employment gaps.

“It may sound simple, yet companies will continue to experience high turnover and absenteeism until they make the work environment and employee welfare their top priority,” said Elliott. “There is a sizable group of available workers, but they are transient and switch jobs frequently. If the work environments and benefits were more attractive and flexible, then this transient group would be more willing to commit to permanent work opportunities.”

Question of the Month: How Will Your Company Handle the Extra Workload this Holiday Season?
Agile vs. Waterfall: Establishing a Project Management Solution that Works for You