By Refresh Leadership on October 26, 2022 in Innovation and Productivity, Workplace

Facing a busy holiday shopping season with a shortage of workers, nearly 80% of U.S. companies believe automation could help their business, and 74% say it’s the key to keeping up with current demand.

With nearly two-thirds of U.S. hiring decision-makers (64%) admitting they waste time each week completing tasks that could be automated, it’s not surprising that nearly half (49%) feel this tactic could help their company save time.

Saving money (42%) and increasing productivity (37%) are also among the top potential benefits of automation, while around 3 in 10 (31%) believe it could help streamline processes. Almost a quarter feel it has the potential to decrease employee workloads (23%) and/or minimize the number of errors made (23%). 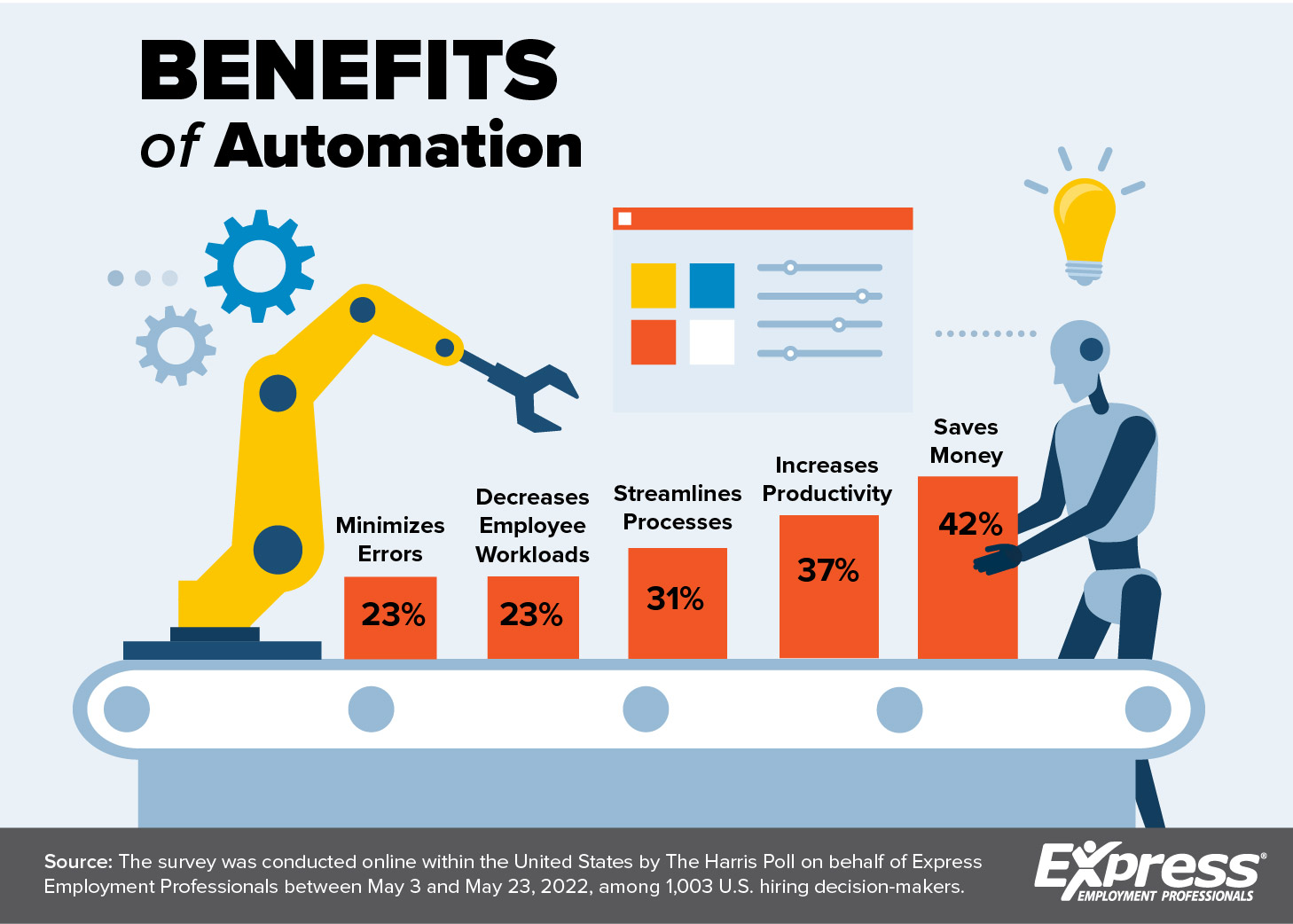 More than a quarter of U.S. hiring decision-makers (27%) report their organization has adopted new technology to automate tasks/processes during this time. More generally across the company, they say their company automates an average of 27% of its hiring/recruiting functions. Forty-three percent add that they automate more than a quarter of their hiring/recruiting functions.

Unsurprisingly, companies with more than 500 employees are more likely than those with less than 500 to report a higher average of automated functions:

In terms of using automation as a solution to the current labor shortage, 74% of hiring managers would be comfortable with their company increasing the use of automation to help solve this issue. Similarly, 64% say their company would be likely to use it for this purpose; 25% would be very likely. Automation may be just the solution companies are looking for, as many businesses (63%) feel they would increase the use of automation instead of hiring workers.

Benefits and Consequences of Automation

“However, not every process can be improved with automation,” she added. “For example, in customer service, having a live person assist a frustrated client cannot be replaced by any machine. In manufacturing, quality variances in product specifications are always best identified with the human eye. Some parts of the process can be automated, but some can never be effectively performed by a machine.”

Mike Brady, Express franchise owner in Florida, agrees that some negative drawbacks to automatic functions are the high cost and reliance on machines. But in the manufacturing industry, the shift to automation is already producing positive results for one of his clients. A shampoo bottling company has been able to reduce its headcount by half and increase production to a 24-hour cycle.

Reed also has an industrial client who began automating the packaging process. Instead of hiring packers and assemblers, the company has started installing packaging machines to bookend operations.

“Larger companies will probably be the first to automate,” she said. “The reason is the cost of purchasing the robotic process, the cost of re-engineering the process line to incorporate a new automated process and the capital investment it takes to change a process to automation.”

Despite concerns from job seekers and employees that machines may replace their livelihood, Reed assures them this is not the case for her clients.

“There will still be the need for skilled employees,” she said. “Automation may result in non-skilled workforce opportunities diminishing, meaning that workforce will need to improve technical skills to be competitive in the new job market.”

The best thing workers can do right now to prepare for a shift to automation is to invest in training to diversify their skills for future in-demand careers.

“Companies have been forced to find a way to keep their businesses up, and automation seems to provide a logical solution when so many workers are on the sidelines,” Express Employment International CEO Bill Stoller said. “Instead of fearing it, automation could create opportunities for both employers and their staff to ensure business continuity and professional growth.”

Stressed Out: Overcoming Anxiety in the Workplace
Question of the Month: What Type of Holiday Party Is Your Company Planning This Year?