Employee departures continue to plague the workforce as 48% of U.S. hiring managers say their company is experiencing increased turnover, up from 44% in late 2021.

Each year, employee turnover costs companies an average of $57,150 (e.g., cost to rehire, lost productivity) overall. Nearly a quarter of hiring managers (23%) say it costs their company $100,000 or more per year.

Turnover does more than simply affect a company’s finances; it can also impact its other employees. Slightly more than 7 in 10 (71%) hiring managers agree employee turnover places a heavy burden on existing employees-specifically in companies with 100-499 employees (76%) and those with 500 or more employees (78%). With the added complexity of the current labor shortage, companies are having to lean heavily on their current employees.

A majority of hiring managers (78%) say their company has been affected in some way by the departures, namely having to increase workloads for existing employees (38%). As a result of the heightened turnover, around 4 in 5 (82%) plan to rehire former employees, generally either to increase their overall headcount (43%) or keep the same level of personnel (32%).

For companies that have seen increased turnover this year, many hiring managers attribute these vacancies to employees resigning (34%), increase in workplace demands (31%), better pay/benefits offered elsewhere (31%) and the competitive job market (28%). Around a quarter say the reason for the increased turnover is due in part to employees retiring (26%), better perks elsewhere (e.g., summer Fridays, unlimited vacation days) (26%), better company culture elsewhere (25%) and/or employees feeling overworked (24%). 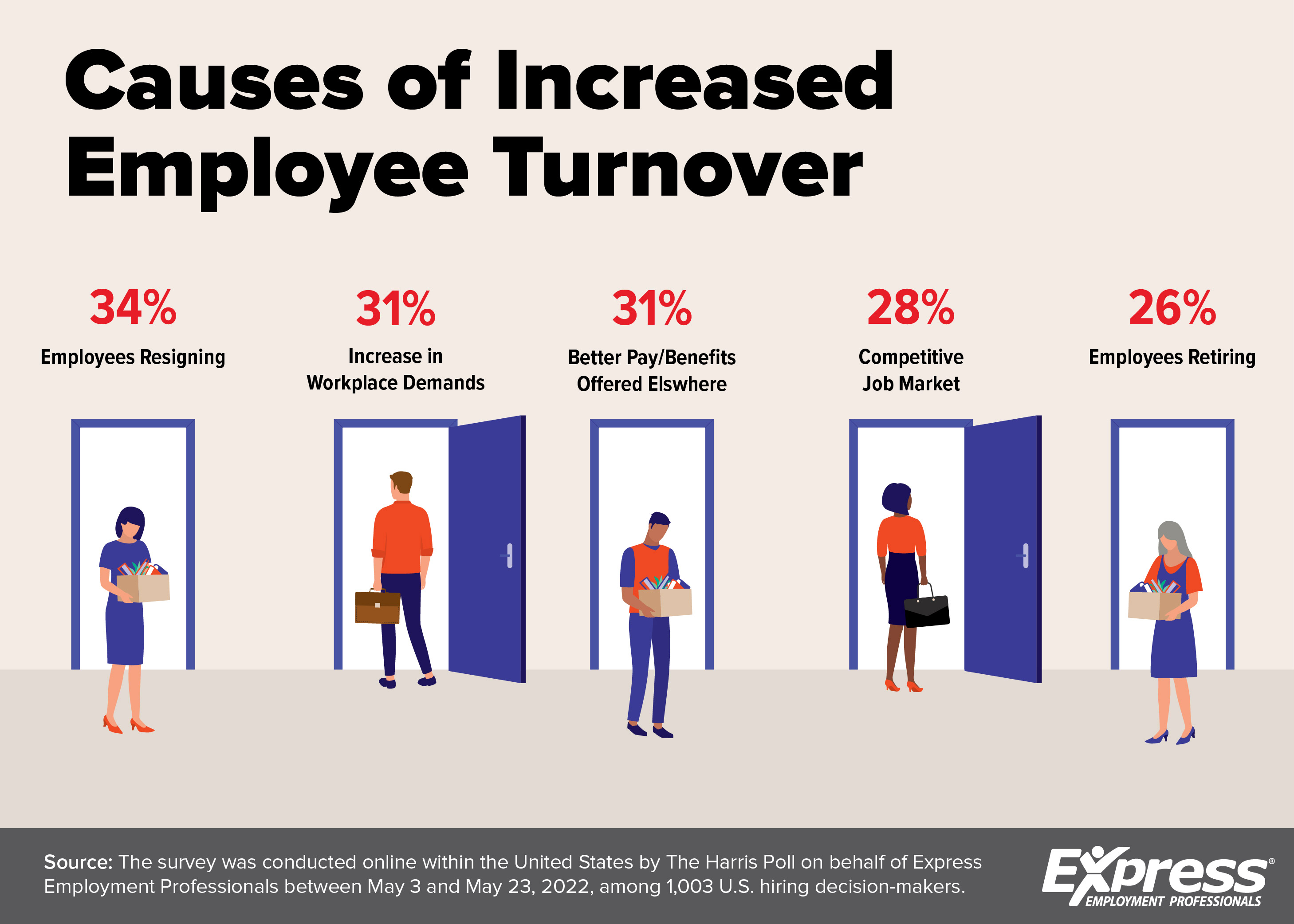 Retention has replaced recruiting as the top employment issue with many of our clients, says Greg Sulentic, Express franchise owner in Nebraska.

“Employees have so many choices for employment,” he said. “Often, the application or vetting process is shortened, so there is little incentive for individuals to avoid job hopping for higher paying positions.”

In some cases, the Nebraska franchisee adds that turnover could be positive for employees as those who choose to stay with a company now have the opportunity to move up the ladder faster than they typically would in more stable operations.

“However, the turnover typically is very difficult for the remaining staff, compounding the need for additional shifts and excessive overtime,” he acknowledged. “The result is even higher levels of turnover leading to faster training cycles and higher entry-level wages.”

“Recognition of your employees goes a long way, which includes not overworking them and making sure they see the effort to try and fix the issues,” he said.

To help stem the exodus of workers, Sulentic and Brady say it’s worth the effort to invest in your staff and improve the overall work experience.

Brady suggests making sure pay, company culture, and working conditions are attractive to both job seekers and current employees as a solution to unwanted turnover.

“In addition, ask current team members what they want or how you can help,” he added. “It literally pays to listen.”

“A well-rounded workforce is one that stays,” he said. “The goal of any employer should be to create such a healthy company culture that top talent will turn down other job offers. It may just be the key to stopping future turnover.”

Question of the Month: What Are Your Business Performance Predictions for 2023?
Maintaining Focus During the Holidays