By Refresh Leadership on December 28, 2022 in Leadership and Management While a majority of U.S. hiring managers feel positive about their company’s hiring outlooks, 85% still expect challenges over the next year with 75% saying it keeps them up at night.

But as to what is causing these decision makers to lose sleep, 3 in 10 say the labor shortage continuing (29%), increases in employee turnover (28%), increased demand from candidates for better benefits in order to accept a job offer (27%) and an inability to fill open positions (27%) are among those late-night fears. 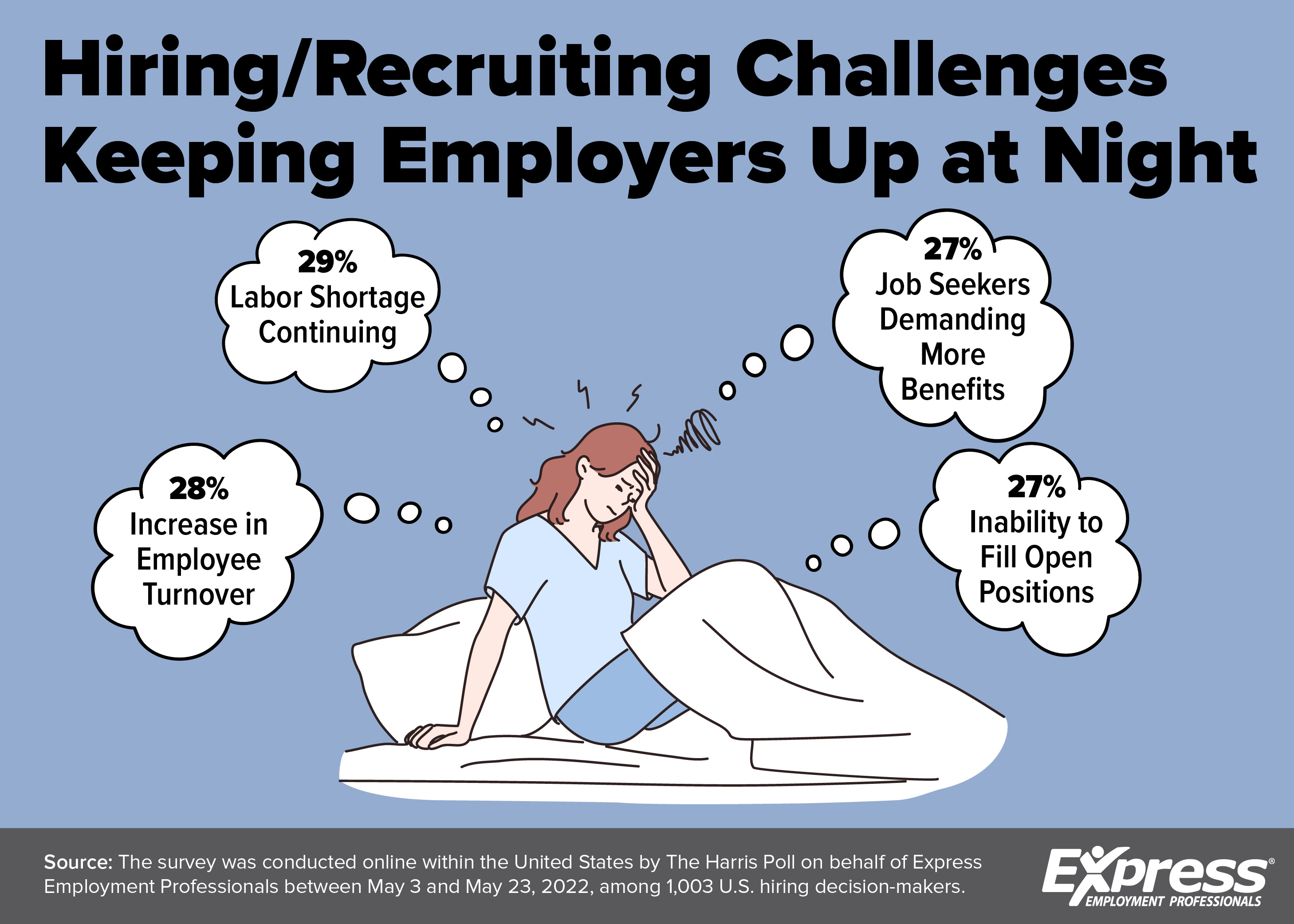 For some, the inability to fill open positions is not just a fear for the future, but a current problem they are actively trying to solve, including many hiring managers (42%) who say their company currently has open positions that they cannot fill. Corresponding with the top hiring challenges companies face, those with open positions report they are not filled due to a lack of applicants. This includes applicants with hard skills (39%), relevant experience (38%), soft skills (36%) and/or applicants in general (34%).
Top Challenges
Market uncertainty, supply chain issues, low labor force participation, increasing number of retirements, labor costs, inflation and a potential economic downturn make counting sheep to sleep a necessity for business owners right now, according to Michigan Express franchise owner Reggie Kaji.

“If we don’t get inflation under control and wages continue to rise, we will eventually see a lot of businesses fold,” he said.

Greg Sulentic, an Express franchise owner in Nebraska, agrees and places rising wages at the top of the list for business killers.
“Wages skyrocketed in the last few years and with that, the cost of doing business went through the roof as well,” he said. “Employers need to moderate wages without losing their workforce. That’s difficult in a job market that is still hot.”
Available Applicants Increasing
There have been a few signs of hope for a more robust candidate pool where Sulentic says the key term now is “retention” more than “recruiting.”
“We are seeing more applicants and interviews completed in our offices,” he said. “Industrial workers are re-entering the workforce attempting to beat an anticipated hiring slowdown. Industrial worker shortages are still at a high level in rural markets and wages are staying on pace with the demand.”
In light of “The Great Resignation,” which saw workers jumping ship in great quantities for better opportunities, both Kaji and Sulentic see the trend slowing as openings dry up, increasing the labor pool once again.
“Fear of being stuck without a job during a recession is terrifying for the check-to-table employees,” Sulentic said. “Even those late entering the workforce after the pandemic are pressing to get in on high wages still being offered and lock in with a company before those jobs are gone. It’s not time to panic yet, but I think we could get to the rush/panic stage for out-of-work job seekers early next year.”
However, Kaji believes company loyalty will continue to suffer in light of the workforce cultural shift over the past few years.
“We are living in a time when candidate priorities have moved toward a focus on work-life balance versus making a lot of money,” he said. “A lot of people have restructured their lifestyles to manage that balance and are willing to jump for more perks versus pay, although I do think focus may decrease a bit over time. People want security and with fewer available jobs, they may be more inclined to stick with what they have.”
Demand for top talent is still incredibly high and even if all the other pieces fall into place, such as sufficient product and demand, businesses can’t operate without workers, according to Express Employment International CEO Bill Stoller.
“With some promising signs of inflation easing and more job seekers entering the picture, my hope for the new year is that employers can finally catch a break and get a good night of rest after the tumultuous past two years,” he said.
The Great Divide: Utilize This Resource to Close the Hiring Gap
Question of the Month: What Are the Top 3 Characteristics Great Leaders Should Possess?