By Refresh Leadership on January 11, 2023 in Express Employment Professionals, Leadership and Management
Personal social media posts are not off limits to employment determinations as 88% of U.S. hiring managers say they would consider firing employees for content found in workers’ posts, according to a survey from The Harris Poll commissioned by Express Employment Professionals.
Fireable offenses include publishing content damaging the company’s reputation (59%), revealing confidential company information (58%), showcasing and/or mentioning illegal drug use (50%), violating the company’s social media use policy or contract (45%) and showcasing and/or mentioning underage drinking (38%). 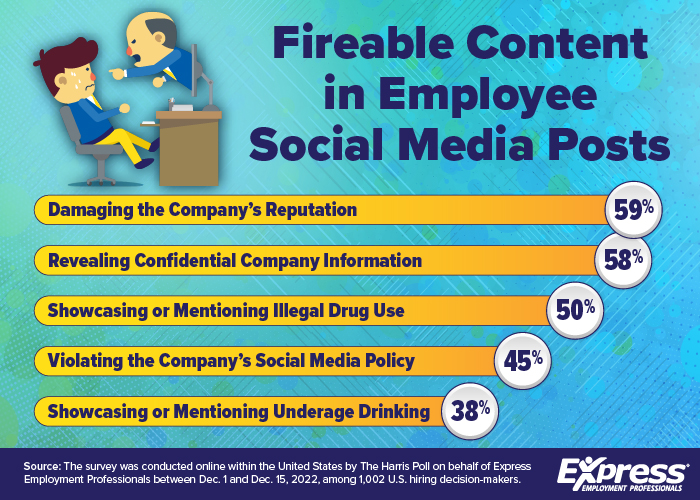 Only 12% of U.S. hiring managers say there is nothing a company could fire an employee for based on their social media posts.
When asked the same question, the majority of job seekers (86%) agree companies can fire employees based on their social media posts that reveal confidential company information (64%), violate the company’s social media use policy or contract (58%) or damage the company’s reputation (57%). Further scrutiny extends to content showcasing and/or mentioning illegal drug use (50%) or underage drinking (43%) and showcasing and/or mentioning beliefs different than those held by the company (21%).
Social Media Use on the Clock
1 in 4 employers (40%) discourage the use of social media during work hours, while 30% provide resources and information on professional social media etiquette. Twenty-six percent of companies have a social media use policy/contract that employees must sign, and 25% encourage their workers to build their personal brand on social media.
Leadership blocks social media sites on company property at 19% of businesses, 17% view or monitor employees’ social media accounts and 13% have access to employees’ social media accounts.
Access to Workers’ Accounts
“Employees should limit social media use to only breaks and lunchtime,” said Mike Brady, a Florida Express franchise owner. “Without a doubt, social media consumption eats into productive time in the workplace, so personal social media should be conducted on personal time.”
Despite the distinction between personal social media and company-driven usage, Brady believes employers should only actively monitor online accounts used for business. This would apply to more professional positions versus light industrial.
Reggie Kaji, an Express franchise owner in Michigan, however, asserts due to the potential negative impacts on the company’s reputation, even the personal social media accounts of workers are fair game.
“If a potential customer or a current one follows an employee on social media and doesn’t agree with their content, it can harm the relationship,” he said. “Especially with politics and today’s polarizing environment, I prefer not to follow coworkers and customers on most social media other than LinkedIn.”
Regardless of privacy beliefs, both Kaji and Brady say certain content posted online would constitute termination, including anything racist, raunchy, and/or calling out of anyone affiliated with a company in an unprofessional manner and threats or threatening comments.
Professional Online Presence
One tactic to help mitigate inappropriate posts by employees is to have them commit to a company social media use policy.
“We have a policy in place, and it’s in our handbook,” Kaji said. “I think it’s important to set expectations so if employees violate the policy, it’s not a surprise.”
Brady is a little more hesitant to encourage a policy for what he calls a complicated situation.
“I think employers walk a very fine line here,” he said. “On one side is the right to privacy and free speech and on the other is the employer’s image. Especially in this day and age when accessibility is through the click of a button, the court of public opinion will almost automatically point the finger at the employer for ‘why’ they didn’t know something was good, bad, right or wrong, even if it’s on the employee’s social media account.”
Overall, according to Kaji, employers should remind workers of the importance of maintaining a professional image on social media and how it could impact their careers since a lot of hiring managers look at social media as part of the hiring decision.
“Social media is a powerful tool for expression and connection, but a poor decision in content posting can haunt individuals the rest of their careers,” Express Employment International CEO Bill Stoller said. “The best advice is to refrain from publishing anything you wouldn’t want your boss to see or think you may regret in the future.”

Making the Most of Your Skills as a Leader: EQ
Leadership Lessons from Dr. Martin Luther King, Jr.