By Refresh Leadership on August 28, 2019 in Leadership and Management, Workplace

ollowing the inaugural survey of America’s blue collar workers in 2018, Express Employment Professionals has partnered once again with The Harris Poll to learn more about how today’s white collar workers compare with blue collar employees and those who fall in the middle-grey collar professions.

Despite a similar outlook of the future, regardless of collar color, the survey revealed American workers have substantial student loan debt, are not saving enough for retirement, but feel their jobs provide a good living for the present.

Grey collar industries emerged as the forgotten workforce when comparing demographics and sentiments between the traditional stereotypical white and blue collar jobs. But with 40% of grey collar workers expecting substantial job growth in their fields over the coming years, they are an important segment to survey in order to accurately capture American employment data as a whole.

College: Was it Worth it?

For workers with a high-school diploma or less, more than half look back and wish they had a four-year degree or attended a community college or vocational school. Seventy-nine percent of grey collar workers and 72% of blue collar workers believe they would have had more opportunities if they had attended college.

For those with a college degree, more than 1 in 3 grey collar workers, 35%, and almost 1 in 4 white collar workers, 24%, say they think the higher education they received is absolutely essential to their current job. In fact, most college graduates, 79% grey collar and 70% white collar, think going to college was worth every penny.

Retirement: Saving for the Future

But for now, job satisfaction is high among most workers. Eighty-eight percent of grey collar workers and 86% of both blue and white collar workers say they are at least somewhat satisfied with their job and an average of 89% of all workers are proud of the work.

Conversely, white and grey collar workers say the top thing they dislike about their job is having limited or no advancement opportunities (30% white collar, 27% grey collar). Blue collar workers mostly dislike that their job can be dangerous at times, 39%, though they also report limited or no advancement opportunities, 28%, as reasons they dislike their field.

Political Differences? Not So Much

At a time when the country is divided along many lines, views on political parties are notably similar between the groups. When asked which political party does a better job of helping Americans in their line of work, there is no consensus.

With 2020 approaching, the 2019 survey also polled grey and white collar respondents on their concerns ahead of the election. (Similar questions were not posed to blue collar workers in the 2018 survey). Respondents could select all issues that applied. The concerns that rise to the top for U.S. workers are as follows:

Hopeful for Their Profession in the Future

Looking down the road, roughly 3 in 4 workers believe there is a good career path in their line of work (75% white collar, 74% blue collar, 72% grey collar) and would encourage a friend or family member to pursue a job in it (70% grey collar, 68% white collar, 64% blue collar). However, they are less enthusiastic about encouraging a child to follow in their footsteps with only 64% of white collar, 62% of grey collar and 51% of blue collar workers making the recommendation. For those who would encourage a child to pursue the same career, the top reasons for doing so include because it’s enjoyable and profitable.

“The value of work is not found in the color of the collar one wears, the location of a job, the existence of an office or even the size of the paycheck. The value of work is found in the sense of purpose and pride it gives the worker,” said Bill Stoller, CEO of Express. “White, grey and blue collar Americans have clear differences, but they are also telling us that they feel good about themselves, their families and their future. That’s a good news story.” 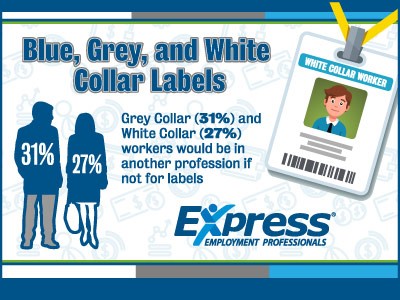 Figures are weighted where necessary by age, by gender, race/ethnicity, region, education, income, marital status, employment, household size and propensity to be online to bring them into line with their actual proportions in the population.

Be sure to subscribe to our RSS feed - powered by Express Employment Professionals!
In the US, 17 Million People Find Work Through Staffing
Canada Employed: Labour Day Poll of White Collar and Grey Collar Workers