By Refresh Leadership on July 22, 2020 in Express Employment Professionals

In a stark contrast from a 2019 survey, a majority of hiring decision-makers are concerned about the U.S. economy amid the COVID-19 pandemic.

Eighty-three percent of hiring decision-makers are currently worried about the economy, and 62% wish their company was doing more in response to the unstable situation. Just one year ago, 63% of employers felt the economy was stronger than the year before in the 2019 Hiring Outlook conducted by Challenger, Gray, and Christmas, Inc. 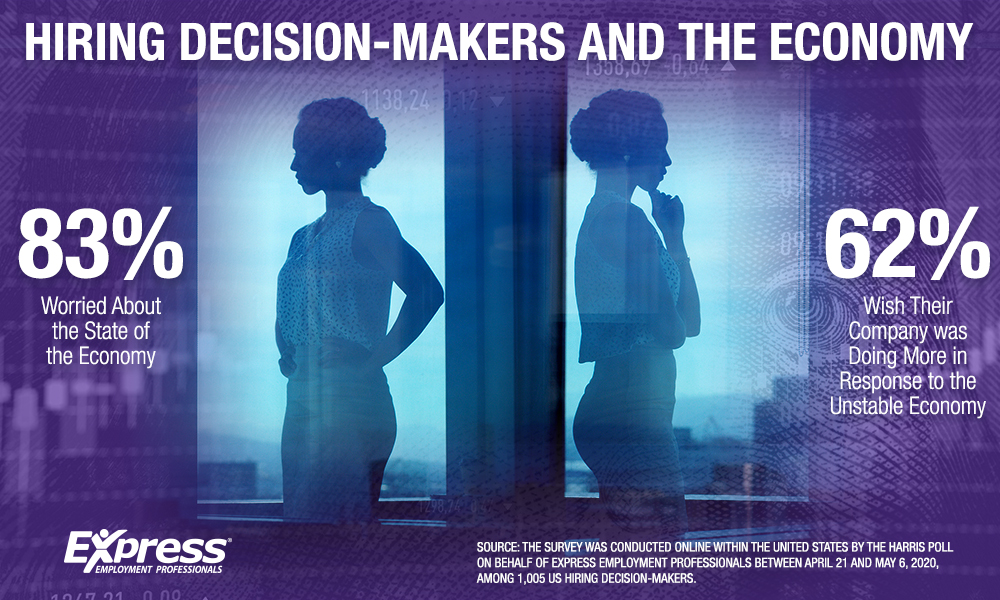 Nearly 2 in 5 U.S. hiring decision-makers (38%) believe the U.S. has already entered another recession, with more than half of those at companies with two to nine employees (55%) saying the U.S. is already in a recession. A similar proportion (39%) say the U.S. will enter a recession within the next six months.

“There is a mix of feelings depending on the industry. Most of our current clients are trying to make up for lost time and hit new production goals. They are actually struggling to find the talent they need,” said David Robb, Director of Operations at the Grand Rapids, Michigan, Express office. “I think most companies are looking at the short term and focusing on ramping back up.”

Stephanie Miller, Express franchise owner in Bend, Oregon, adds she is seeing the cost of employee benefits decrease, so businesses should revisit plans for possible savings. If loss of revenue becomes dire, however, she also warns against another possible consequence.

“Oftentimes, companies make the mistake of getting so lean that they require overtime to get the job done, which is ultimately more expensive,” Miller said.

As for how long the economic uncertainty will last, all three Express experts agree recovery is directly tied to the virus.

“Of course, much depends on COVID-19 and a possible resurgence, as well as vaccines and testing,” Isaacson said. “The staffing industry has always been a pretty good indicator of coming recessions and it is clearly saying this one will be short-lived.”

Robb adds his area has seen a quick resurgence in business as several restrictions have been lifted.

“I predict that any recession will only be as long-lived as restrictions are needed to keep people safe and slow the spread of the coronavirus,” he said.

With many economists predicting the worst has passed, Express CEO Bill Stoller, says businesses should continue to be flexible to meet current product and service demands.

“This pandemic may have taken businesses by surprise, but the best economic recovery strategy is to keep a tab on current market conditions and continue to adapt,” he said.

The survey was conducted online within the United States by The Harris Poll on behalf of Express Employment Professionals between April 21 and May 6, 2020, among 1,005 U.S. hiring decision-makers (defined as adults ages 18+ in the U.S. who are employed full-time or self-employed or have been laid off, furloughed, or given a zero hour schedule in the past 60 days but worked full-time or were self-employed full-time prior, work at companies with more than 1 employee, and have full/significant involvement in hiring decisions at their company). Data was weighted where necessary by company size to bring them into line with their actual proportions in the population.