By Refresh Leadership on December 9, 2020 in Express Employment Professionals

The majority of unemployed Americans say the COVID-19 pandemic is most responsible for their job loss and continued unemployment, which is becoming more daunting as time passes.

More than 2 in 5 unemployed adults (41%) have been out of work for six months or less, becoming unemployed during the pandemic. The most common reason they are unemployed is their job or position was eliminated due to COVID-19 (33%), followed by they quit (12%) or were laid off (11%). Fifty-seven percent say the pandemic is most responsible for their current unemployment and 60% believe COVID-19 is the reason they are still unemployed.

Most unemployed adults report negative feelings about being out of work, saying they:

There is a hint of resiliency as 74% are confident everything will turn out fine and they are able to handle the stress of unemployment (69%).

However, the black cloud of the pandemic continues to linger as 19% of unemployed U.S. adults would not or are unsure if they would return to work right now if offered a job, and of those, about half say it is because of concerns about the COVID-19 infection rate (52%) and 45% worried about safety.

“The workforce has been hit hard this year by COVID-19, and it’s understandable unemployed Americans are becoming more discouraged the longer the pandemic lingers,” Express CEO Bill Stoller said. “This new survey gives us great insight into the plight of the unemployed and how they are staying afloat.”

The national survey of 1,504 U.S. unemployed adults ages 18 and older was conducted online by The Harris Poll between Oct. 15 and Oct. 28, 2020. It offers a detailed, in-depth look at who is unemployed and why.

Finding a job is the top priority for the majority of unemployed adults (70%) who say there is no activity more important right now than finding a job. On average, they spend 12 hours a week looking for work.

Nearly four-in-five unemployed adults (79%) say they have not completely given up looking for a job but most (73%) expected to find a job more quickly. Sixty-four percent agree they are finding it hard to keep their effort level high in the job hunt, and 67% say the longer they are unemployed, the harder they’re finding it to keep working hard to find a job. 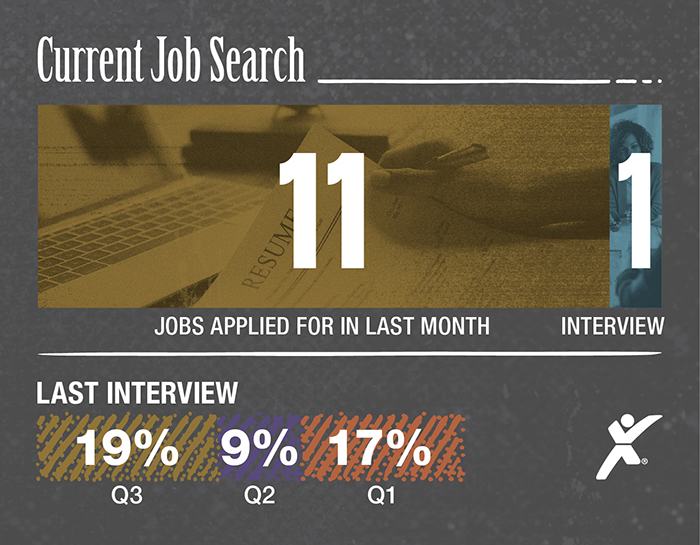 More than 2 in 3 unemployed adults (69%) do not feel financially secure right now, and 70% believe they do not have enough savings to survive unemployment much longer.

The most common sources of income during this time are savings (40%) or financial support from friends and family members (29%). Additionally, half of unemployed adults (51%) say they rely on gig work to keep them afloat.

Seven-out-of-ten (70%) say their household currently has some money in savings, but the majority of those with savings (66%) add the amount is less than $5,000 and think it will last less than six months (61%). Only 50% are confident they will find a job before their savings run out, which could be why the majority (70%) think in regard to the economy, the country is headed in the wrong direction. 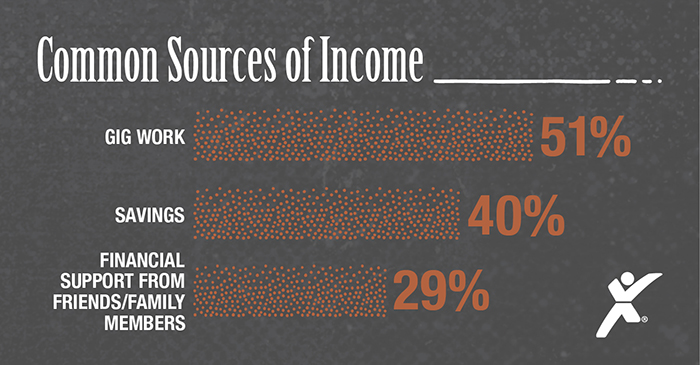 Looking at national and state unemployment benefits, 3 in 4 (75%) agree there is not enough financial support provided to those individuals who are unemployed, especially given that more than half (56%) used to be the breadwinner for their household.

Twenty-seven percent of unemployed adults report they currently rely on unemployment compensation benefits. Around half (49%) say they would not be able to make ends meet without this assistance. The average income from unemployment benefits among those receiving them is $828 a month.

Unemployed adults receiving unemployment compensation benefits, on average, applied to 15 jobs in the previous month, whereas those not receiving benefits applied to nine.

Most unemployed adults (83%) say they are hopeful they will find a job they really want in the next six months. In line with this optimism, more than 2 in 3 (69%) are at least somewhat hopeful they will soon find a job that has good benefits, is for the pay they want (69%) or is as good or better than the last job they had (67%).

Sixty-three percent of unemployed adults are looking for a job in a different field because they haven’t been able to find one in their line of work and 57% believe that starting over in a new field is the only way to find a job right now during the COVID-19 pandemic (57%).

Regarding the job search, 82% say they are currently facing challenges while trying to find a job during the COVID-19 pandemic, including competing against more people looking for jobs (56%), limited-to-no opportunities to attend in-person networking events (32%) or limited opportunities to expand their skills (30%). 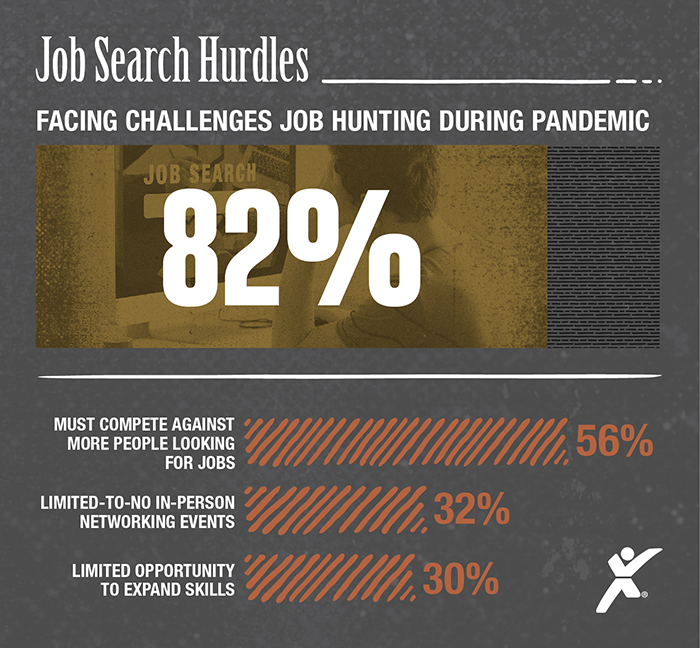 Additionally, about half of unemployed adults (48%) say they are not surprised they don’t have the skills employers want. Many believe expanding their hard skills (35%) or improving their soft skills (29%) would make it easier to find a job during the COVID-19 pandemic. Despite 60% saying their education provided them with many of the skills necessary to be successful in the workforce, 37% of those with at least a bachelor’s degree wish they had focused on a vocational career rather than getting their college degree. 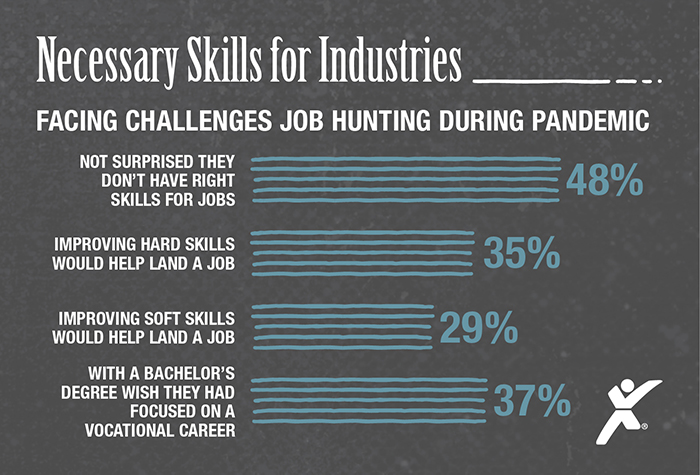 Because of difficulties in the current job process and increased competition from other job seekers, 85% would be willing to accept some aspects of a job that may be less than ideal if they were offered a job right now. Although salary/wage (69%), flexible hours (54%) and benefits (51%) are reported as the most important aspects of a job in unemployed adults’ current job search, if offered a job right now, they would most commonly be willing to accept a job not in their desired field (47%), that requires long hours (35%) and a more junior position/title (29%).

The most non-negotiable aspect is salary/wage with only 1 in 4 (26%) saying they’d accept a lower amount. 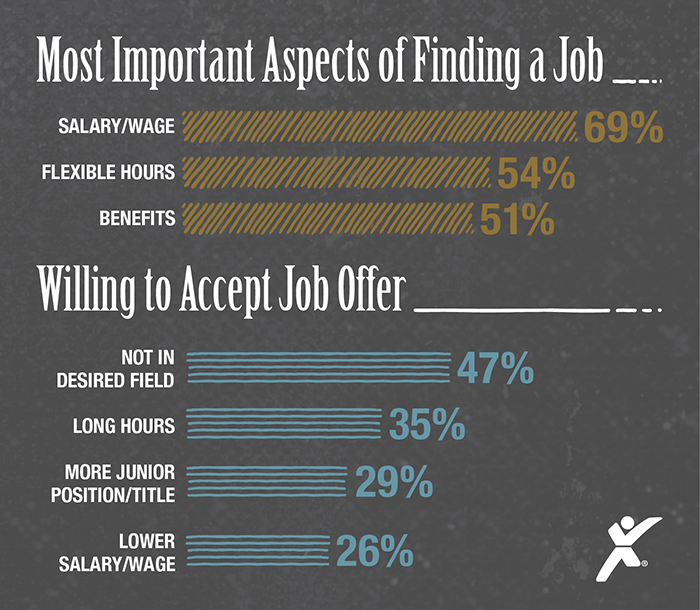 The majority of unemployed adults (61%) are willing to accept almost any job that will help them pay the bills, particularly those who have been out of work for four-to-six months (72%). More than half (53%) say they don’t apply for jobs that pay minimum wage because it’s not enough to pay the bills, but 57% agree the COVID-19 pandemic has driven them to start looking for a job with lower wages than they would like.

“A job is about so much more than a paycheck, so our hope is to get people off the sidelines back into the workforce, safely,” Stoller said. “Even during these incredibly challenging times, unemployed Americans need to feel a sense of hope and dignity through meaningful employment that will allow them to provide for themselves and their families.”

2 Responses to Air of Despair: 57% of Unemployed Americans Blame COVID-19 for Job Loss