Following a year of hardship and economic downturn, good compensation and benefits are crucial for employee recruitment and retention. However, in a time of fierce competition for top talent, 69% of companies say it’s impossible to offer all the benefits employees want.

Nearly 1 in 3 companies that have experienced an increase in employee turnover this year (32%) point to better perks offered elsewhere (e.g., Summer Fridays, unlimited vacation days) as the reason for the higher turnover, which increased from the second half of 2020 (26%). Nearly 1 in 5 companies report some of the biggest hiring challenges their company will face over the next year are that their pay is not competitive (18%) and/or their benefits are not competitive (17%). 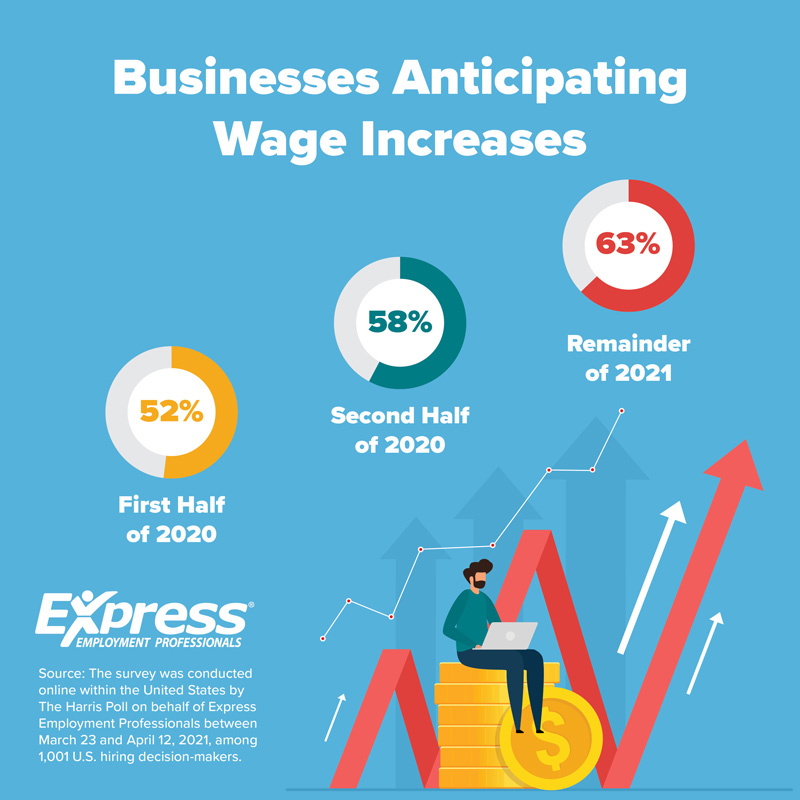 Further, more than 2 in 5 (43%) expect their company’s benefit offerings to increase continuing into the next quarter as compared to 2020, and around half (49%) expect their benefits to stay about the same.

“Competitive pay and benefits have never been more important,” said Greg Sulentic, Express franchise owner in Lincoln, Nebraska. “It’s not about pulling people into the workforce; it’s about stealing employees from your competitors. Staffing recruiters often feel like sports agents trying to put the best offer out there just to pull a welder or CNC operator from their current job to ours. Hourly wage rules all, but sign-on or retention bonuses can be a draw.”

As to what extra perks businesses are using to entice workers, Sulentic says it’s all about time off and travel. No limit on paid time off, true “forced” sabbaticals of month-long vacations or vacations paid for by the company.

In Michigan, Express franchise owner Reggie Kaji has clients compensating employees for a full 40-hour workweek, but they only work 34.

“It’s shocking considering this would have been absolutely unheard of in the past,” he said. “We also have another client offering bonuses of $1,000 per quarter for retention and good attendance.

“Turnover is happening across the board for compensation purposes, not benefits, but actual pay. Honestly, it’s the ‘Wild Wild West.’ I really don’t see the tight labor market cooling down for at least a year.”

Sulentic also doesn’t see much hope on the horizon for labor shortages and competition to ease up as long as employees are unavailable.

“Labor participation is remarkably low, and we don’t anticipate a major improvement,” he said. “People are just not coming back into the workforce.”

For the overall health of the economy, we need those who are on the sidelines to rejoin the labor force and the sooner, the better, Express CEO Bill Stoller said.

“It’s a job seekers’ market right now, and when you find the right candidate, businesses should be prepared to make them an employment offer as soon as possible,” Stoller said. “Any delay and you risk losing top talent altogether.”