By Refresh Leadership on January 25, 2023 in Express Employment Professionals, Leadership and Management, Workplace
With employee turnover showing no signs of slowing down, offering older workers a chance to delay full retirement may help slow the exodus—even if only momentarily, according to a survey from The Harris Poll commissioned by Express Employment Professionals.
Retiring employees are expected to account for 28% of turnover in 2023, with U.S. hiring managers reporting among those at their company who retired in the past two years, most commonly 60 years of age or older (79%).
However, in an effort to postpone the time of retirement for employees, some have chosen to offer “semi-retirement,” which allows employees to reduce their hours and/or make a flexible schedule (30%).
Employees appear to take advantage of this offering, as nearly 3 in 5 hiring managers whose company offers semi-retirement say the number of employees choosing to semi-retire has remained the same over the past two years (59%) and nearly 2 in 5 reporting the number of those semi-retiring has actually increased (37%). 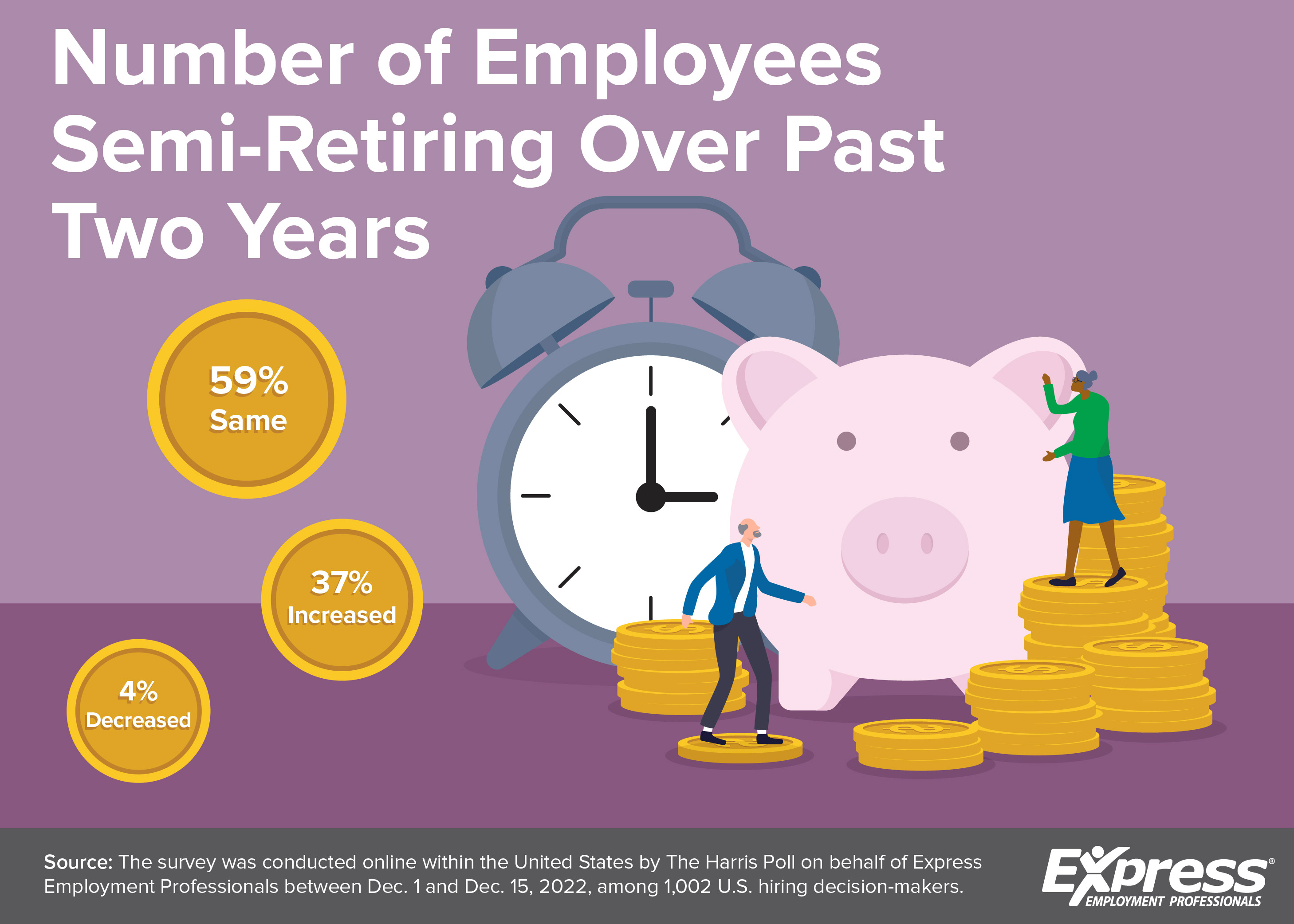 Given the contribution of retirement to companies’ turnover, it may be wise for more companies to offer semi-retirement in the hopes of retaining members of their workforce.
Retirement Timeline Disruptions
Around the country, Express franchise owners have noticed the disruption in retirement patterns over the past few years.
“Normally, I see or hear retirement announcements from LinkedIn, at various networking events and in newsletters,” said Jon Noceda, a California Express franchise owner. “I have not seen one retirement announcement since early 2022.”
Reggie Kaji, an Express franchise owner in Michigan, has actually seen an increase in employees retiring, hypothesizing that people don’t want to deal with the stressors in today’s workforce.
“The COVID-19 pandemic has also factored into early retirement,” he said. “More people who are older in age have been hanging up their boots because of the increased risk for infection at work.”
Market uncertainty has also played into foregoing retirement for now with skyrocketing inflation and the crashing stock market.

“Due to the uncertainty of our economy, many are extending their career timeline as their retirement funds have been significantly affected,” Noceda said.

Dual Benefits of Semi-Retirement
For employees who are somewhat ready to retire and companies that can’t afford to lose top talent, semi-retirement is a win-win situation for both. Semi-retirement could consist of transitioning to a consultant role working fewer hours and with more flexibility.
“Having someone in a semi-retirement role could benefit a company thanks to their experience and corporate knowledge,” Noceda said. “It’s a great benefit for both the employee and employer.”
Extra hands in the workforce are the greatest benefit for Kaji.
“Semi-retirement allows for the retention of the skilled workforce, will taper down the demand for workers and keep wages from continuously increasing,” he said.
Kaji says one of his clients employs an engineer on a part-time contract for 24 months just helping a company with a project. The hiring manager specifically asked them to recruit a retiree for this role.
“As baby boomers continue to age and consider retirement, the labor shortage is only going to get worse,” said Bill Stoller, Express Employment International CEO. “Semi-retirement is one solution to allow experienced workers time to train their successors, ensuring a seamless knowledge transfer and business continuity.”